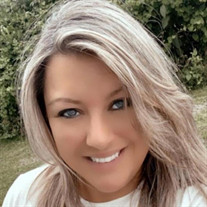 Amanda Gail Hiott Grainger, 38, of Cleveland NC died Wednesday, August 25, 2021. She was the daughter of Johnny Hiott and Gail Queen Breeden and was born in Rockingham County on December 17, 1982. Amanda was a billing clerk with Pratt Industries.... View Obituary & Service Information

The family of Amanda Hiott Grainger created this Life Tributes page to make it easy to share your memories.

Send flowers to the Grainger family.