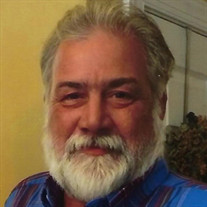 Howard Micheal “Mike” Taylor, 63 yrs., of Statesville, was welcomed unexpectedly into the Gates of Heaven by his loving mother and brother on Monday, October 25, 2021. Born on April 7, 1958 in Scotland County, NC, he was the son of Howard Taylor and the late Addie White Taylor. Mike was loved by many. He was known for his “big heart,” generous soul and his laughter. His wife and family were his pride and joy. He was a hard worker and known in the community by many. He had a gentle spirit that left an impact on those around him. He loved going fishing at the beach, and spending time with loved ones. He was a loving husband, father, grandfather, great-grandfather, son, brother, uncle and friend; but most importantly he loved the Lord. He will surely be missed, until we see him again. In addition to his mother, Addie White Taylor, he was preceded in death by his brother, Dale Taylor. On July 17, 1999, he married his wife, Wanda Mooney Taylor who survives him. Mike is also survived by his loving children, Lisa Stewart (Rex), Christine Pope and Tracy Williams and Jason Taylor (Brooke); his grandchildren, Stephanie Cass (Marty), Brittany Bass (Derek), Ashley Vetter (Seth), Jack Gibson, Willie Gibson (Jennifer), Macy Pope, Eli Pope, Miriam, Micheal, Icsis, Bubby and Elli; great-grandchildren, Hudson, Finley, Owen, Riley, Emma and Wyatt; his father, Howard Taylor; his siblings, Ronnie Taylor (Jayne), Meshelle Taylor Dagenhart (Eric), Star Taylor Bradford (Keith), Rhonda Taylor and Sharon Long (Bill); and many nieces and nephews. The family will receive friends from 1:00 pm to 2:00 pm, Sunday, October 31, 2021 at Beulah Baptist Church. Funeral Services will be held at 2:00 pm at Beulah Baptist Church with Pastor Brian Burgess officiating. Burial will follow the services in Oakwood Cemetery. Serving as pallbearers are Jack Gibson, Willie Gibson, Eli Pope, Josh Taylor, Brandon Taylor and Preston Taylor. For those who wish, memorial contributions may be made to the American Heart Association, www.heart.org., 7272 Greenville Ave., Dallas, TX 75231 or to the Iredell County EMS, 404 Bristol Dr., Statesville, NC 28677. The family would like to provide a special thanks to the Iredell County EMS, the First Responders and the ER staff at Iredell Memorial Hospital for the exceptional care they provided. Online condolences may be made to the family at www.nicholsonfunerals.com. Nicholson Funeral Home has the honor of serving the family of Howard Micheal “Mike” Taylor.

The family of Howard Micheal "Mike" Taylor created this Life Tributes page to make it easy to share your memories.

Send flowers to the Taylor family.