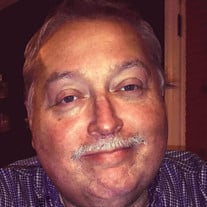 James “Michael” Burchette, 60, of Harmony, passed away unexpectedly on Saturday, October 31, 2020 at his home. Michael was born in Iredell County on July 12, 1960 and was the son of the late James David Burchette and Lucille Moose Burchette. He was a graduate of South Iredell High School and received his associate degree in engineering from Mitchell Community College. On February 6, 1993 Michael married Tammy Binkley Burchette and together they shared 27 years of marriage before his passing. During his free time, Michael enjoyed working with NASCAR teams as a mechanic. He worked for 18 years with Bernhardt Furniture and later worked with Duke Power and Freightliner. Michael loved being outdoors and fishing. He was exceptional with working with his hands and was a natural when it comes to being creative. Michael was a natural born entrepreneur. He enjoyed making little things that were going to better the world. He was also a teacher of all things. He seemed to know a little about nearly every subject. Michael loved cars and spent a lot of time in restoring vehicles. He even bought Tammy a very special birthday gift one year, headers for his truck. Michael was a member of Fern Hill Baptist Church where he served as choir director and was a licensed minister. He loved to sing gospel music. Michaels’ faith was of the utmost importance. His love for music and singing was only a shadow of what it represented which was his love for Jesus Christ. That was his greatest joy and he wanted everyone to go to Heaven. In addition to his parents, he was preceded in death by two sisters, Brenda Anderson and Linda Campbell. Along with his wife Tammy, James is survived by two nieces, Lisa Levan (Coleen Sullivan) and Jansen Bailey and three nephews, Matthew Anderson, Tim Anderson (Crystal), and Jamie Phipps. A sister-in-law Deborah Orren also survives. A service to celebrate the life of Michael Burchette will be conducted at 10:00 am on Thursday, November 5 in the Nicholson Funeral Home Chapel with Chaplain Brad Borders and Dr. Jesse Stroud officiating. The family will visit with friends for one hour prior to service. Burial will follow in the Holly Springs Baptist Church Cemetery. Active pallbearers will be Matt Stevenson, Christopher Williams, Terry Joyner, Mike Stroud, Paul Cockerham, and Scott Stevenson. Honorary pallbearers will be John Gallina, Tim Parker, Tim Mangum, Rob Harroll, Brian Farsaci, Steven Fox and Jason Shumacher. Memorials may be made to Purple Heart Homes at https://purplehearthomesusa.org/donate/. Online condolences can be made to the family at www.nicholsonfunerals.com and Nicholson Funeral Home is serving the family of James Michael Burchette. You may watch the service live here:https://www.oneroomstreaming.com/view/authorise.php?k=160444750184027

James &#8220;Michael&#8221; Burchette, 60, of Harmony, passed away unexpectedly on Saturday, October 31, 2020 at his home. Michael was born in Iredell County on July 12, 1960 and was the son of the late James David Burchette and Lucille Moose... View Obituary & Service Information

The family of James "Michael" Burchette created this Life Tributes page to make it easy to share your memories.

Send flowers to the Burchette family.