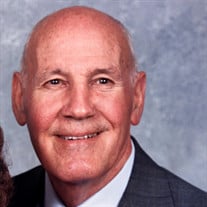 James Edward Henderson, Jr., 90, formerly of Statesville, died Friday, December 20, 2019 at Autumn Care in Cornelius, N.C. Born July 29, 1929 in Eton, Georgia, he was a son of the late James E. Henderson, Sr. and Sara Edwards Henderson. He was a member of St. Johns Lutheran Church and Co-Owner of Mid State Electric and Industrial Leasing company. In 2009 he was presented with the Order Of The Long Leaf Pine on his 80th birthday. He was president of the Civitan Club in 1976and 1977 and was honored for 25 years of service to Civitan in February of 1994. He served in the United State Marine Corps. In addition to his parents, he was preceded in death by a sister, Joyce Lamb. On June 29, 1952 he married the former Rebecca Peeler who survives. Also surviving are a son, Edward Henderson, daughters, Amy Hayes, Judy Abernathy (Carl Michael) and Maria Lewis (Mark and a sister, Jo Grubb (Robert). Also surviving are 4 grandchildren and 3 great grandchildren. Funeral services will be held on Monday, December 23, 2019 at 11:00 at St. Johns Lutheran Church with Pastor Ernie Sheldon officiating. The family will greet friends in the church parlor for one hour prior to the service. Burial will follow at 3:00 P.M. at Whittenburg Lutheran Cemetery in Granite Quarry with the presentation of military rites. Fond memories and expressions of sympathy may be shared at www.nicholsonfunerals.com. The family requests that no flowers, rather that memorials be given to St. Johns Lutheran Church, 740 N. Center St. Statesville, N.C. 28677. Nicholson Funeral Home is entrusted with the arrangements.

The family of James Edward Henderson Jr. created this Life Tributes page to make it easy to share your memories.

Send flowers to the Henderson family.