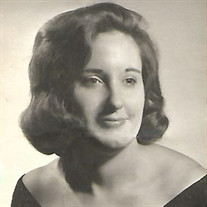 Kathryn Christine Plyler Martin, 79, of Statesville died Tuesday, February 9, 2021 at Iredell Memorial Hospital. She was born in Iredell Country on August 23, 1941 to the late Clyde William Plyler and Dorothy Rose Mitchell Plyler. She was also preceded in death by a sister, Bobbie Jo Gaither, and her husband WD Gaither, and a brother, Clyde William Plyler, Jr. Kathryn grew up in the Lutheran Church. She loved to travel, loved the beach, and enjoyed watching sports such as golf and football. Those left to cherish her memory are two daughters, Melissa Anne Martin, Donna Martin Whitney, a grandson, Landon Wayne Whitney, a brother, Robert Clarkson Plyler (Carol) of TN, a sister-in-law, Sue Plyler and several cousins, nephews, and nieces. A Graveside Service will be held for Kathryn on Friday, February 12, 2021 at 10:00 am at Oakwood Cemetery. For those who wish to pay their respects, Kathryn will Lie in State Thursday, February 11, 2021 at Nicholson Funeral Home from 12 noon until 5:00 pm. The family requests that no flowers be sent, but that memorials be made to Hospice and Palliative Care of Iredell County, 2347 Simonton Rd., Statesville, NC 28625. Online condolences may be left at www.nicholsonfunerals.com.

The family of Kathryn Plyler Martin created this Life Tributes page to make it easy to share your memories.

Send flowers to the Martin family.