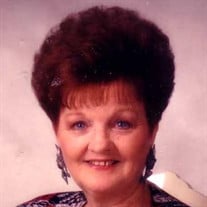 Momma Kay caught the bus to heaven Friday, January 24, 2020. She has a new home with her heavenly Father. She left behind a world made better because she was here. She was born on February 17, 1934, to Malcolm Augustus Knight and Mary Hodges Knight in Norfolk, Virginia. Kay came to Statesville, NC in 1958 with her husband Earl, where she raised five children of her own and countless “adopted” children who called her Momma Kay or MawMaw. She was famous for her homemade biscuits and gravy, banana pudding, her hospitality, and her never-ending dedication to her family and friends. She loved gospel music, shopping at Pigeon Forge, and spending time with her babies, grands, and great-grands. She was a member of The Cove Church. In addition to her parents, Kay was preceded in death by Earl Carney, Sr., her husband of 38 years; Albert Kerr, her husband since 1998; and her siblings, Rosita Ann Clark and Donald George Mikas, Jr. She is survived by her children: Earl “Skip” Carney, Jr., (Karen), of Rocky Mount, Donald Nelson Carney (Norma) of Sherrills Ford, Mary “Sissy” Carney Groce (Johnny) of Yadkinville, Ricky Neal Carney (Lori) of Statesville, Saundra Kay Carney of Mocksville, Angela Hartgrove of Mocksville, Marian Carney Quarles (Wythe) of Rocky Mount, and Lynn Hall Carney of Mooresville, Julie Ann Kerr of Colorado, Lisa Joan Pack (Bill) of Louisiana, Michelle “Shelly” Kerr Stallings of Florida, Janna Kerr Puckett (Leonard) of Florida, and Jonathan Dayton Kerr of Durham. Also surviving are 37 Grandchildren and 30 Great Grandchildren. A service celebrating her life will be held at The Cove Church of Statesville at 2pm on Saturday, February 1, 2020 with a reception to follow in the church atrium. The church is located at 935 Crossroads Drive, Statesville. The family wishes to thank caregivers Peggy Rumple, Nancy Harris, Yami Canales, Diana Canales, Lucille Lopez, Clara Gomez, Hospice of Iredell County, and The Cove Church. Condolences may be sent online to the family at www.nicholsonfunerals.com. In lieu of flowers, the family requests that memorials be given in her name to Hospice and Palliative Care of Iredell County, St. Jude Children’s Hospital, Memphis, Tennessee, or St. Labre Indian School, Ashland, Montana. Nicholson Funeral Home is serving the Kerr family.

Momma Kay caught the bus to heaven Friday, January 24, 2020. She has a new home with her heavenly Father. She left behind a world made better because she was here. She was born on February 17, 1934, to Malcolm Augustus Knight and Mary Hodges... View Obituary & Service Information

The family of Kay Carney Kerr created this Life Tributes page to make it easy to share your memories.

Send flowers to the Kerr family.