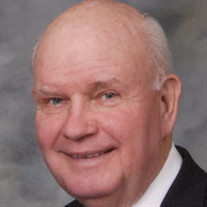 Statesville- Leslie C. Holshouser, Jr., known as “Buzz” passed away on Saturday, October 19, 2019 at Iredell Memorial Hospital. He was born at Fort Jackson, S.C. on December 31, 1943. Buzz was predeceased by his father Dr. Leslie C. Holshouser and his mother Virginia Goodwin Holshouser. Left to cherish his loving memory is his wife of 54 years, Jackie Dull Holshouser; his daughter, Carla H. Wimpy (Terry); sons Bradford Holshouser and Chris Holshouser (Kim). He is also survived by four grandsons who were a great joy to him, Jackson and Luke Wimpy, Grayson and Reid Holshouser and sister, Mary Virginia Beaver. He was a loving husband, father and grandfather. Buzz was a graduate of East Rowan High School and Lenoir Rhyne College. He worked at Ingersoll Rand in Mocksville, N.C. and Davidson, N.C. before working as a sales representative for Ingersoll Rand equipment prior to his retirement. Buzz never met a stranger and could usually be found where there was laughter. He was an active member of First Baptist Church of Statesville where he worked in the food pantry, served on various committees and a deacon. He sang in the church choir for many years. He was a former Jaycee and was a 32nd Degree Mason and a Shriner who volunteered at the Shriner’s Children’s Hospital in Greenville, S.C. prior to moving to Statesville. As an active band fan, he was instrumental in raising $68,000.00 for the new uniforms for the Statesville High School Grenadier Marching Band. Funeral services will be held at 2:00pm Wednesday, October 23rd at First Baptist Church with Dr. Nelson Grenade officiating. He will lie in state in the sanctuary while the family greets friends in Adams Hall from 12:00pm to 1:30pm prior to the service. Burial will follow in the Rose Cemetery in Mocksville, N.C. Fond memories and expressions of sympathy may be shared at www.nicholsonfunerals.com. Memorials may be given to First Baptist Church, 815 Davie Ave. Statesville, N.C. 28677. Nicholson Funeral Home is entrusted with the arrangements.

The family of Leslie C. "Buzz" Holshouser Jr. created this Life Tributes page to make it easy to share your memories.

Send flowers to the Holshouser family.