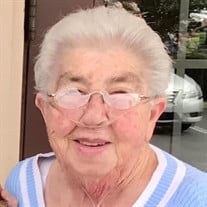 Mrs. Mary Jane Johnson Cline, 86, of Statesville, passed away on Sunday, August 29, 2021 at her home. Mrs. Cline was born in Wilkes County on November 27, 1934 and was the daughter of the late Vernon Johnson and Viola Holloway Johnson. She attended Wilkes County schools and her duty in life was taking care of her family. Mrs. Cline was married for 58 years to James E. Cline, who survives. Mrs. Cline loved to crochet. She also loved collecting dolls and NASCAR, but nothing compared to the love she had for her family. She was a faithful wife, mother, grandmother, and great-grandmother. Although her presence will be missed, her memory will fill the empty place in the hearts of both family and friends. In addition to her parents, she was preceded in death by three brothers, Buster, Herman, and Vernon Johnson along with one sister, Claudine Holland. Along with her husband James, Mrs. Cline is survived by three children, Frankie Cline (Debbie Jenkins), Wanda Ostwalt, and Sharon Walker (Jerry). She is also survived by three sisters, Shirley Johnson (Lynn), Alma Lou Estes, and Dorothy Head along with four grandchildren, and eight great-grandchildren. Graveside services honoring the life of Mary Cline will be conducted at 3:00 PM Thursday, September 2, 2021 in the Iredell Memorial Gardens Cemetery with Rev. Brian Burgess and Dr. James Smith officiating. The family will visit with friends Thursday from 1:00 until 2:30 PM at Nicholson Funeral Home. Memorials may be made to Hospice & Palliative Care of Iredell, 2347 Simonton Road, Statesville, NC 28625. Online condolences can be made to the family at www.nicholsonfunerals.com and Nicholson Funeral Home is honored to be serving the family of Mary Johnson Cline.

Mrs. Mary Jane Johnson Cline, 86, of Statesville, passed away on Sunday, August 29, 2021 at her home. Mrs. Cline was born in Wilkes County on November 27, 1934 and was the daughter of the late Vernon Johnson and Viola Holloway Johnson. She... View Obituary & Service Information

The family of Mary Jane Johnson Cline created this Life Tributes page to make it easy to share your memories.

Send flowers to the Cline family.