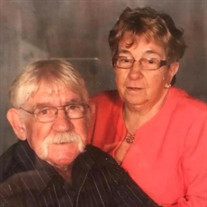 Tommy Ray Bowles Sr. passed away January 18, 2022 and was followed in eternal rest by his beloved wife Belle Stikeleather Bowles January 19, 2022. Tommy and Belle were joined in marriage on July 1st, 1972. Their love with each other was truly special and transcended this life into the next for eternity Tommy was born September 4, 1939 in Alexander County the son of the late Harlan Glenn Bowles and Mazo Clanton Bowles. He is also preceded in death by a son, Tommy Ray Bowles Jr.; and brothers, Alton Bowles, Kent Bowles, Harvey Bowles and Jerry Bowles. Belle was born February 15, 1946 in Iredell County the daughter of the late Jack Stikeleather and Lucy Smith Stikeleather. Tommy and Belle were both instrumental in the founding of Monticello Fire Department, With Tommy being one of the founding members from 1978 until 1995 retiring as Asst. Chief, whom later server upon the Board of Directors. Belle was upon the founding members of the ladies Auxiliary for Monticello Fire Dept. from 1978 until retirement in 1995. Tommy worked for Uniglasss industries in Statesville through the many name changes for 52 years until his retirement and Belle Worked for Beauty Maid Mills and then later CVS pharmacy until her retirement. Tommy and Belle both enjoyed the outdoors with gardening and enjoying the outdoors of both the North Carolina Mountains and the sandy beaches of Myrtle Beach. They both also loved family get togethers, celebrating family birthdays, and grilling hot dogs and hamburgers. Tommy and Belle are survived by sons, Jackie Bowles and Jason Bowles both of Statesville, NC; Brother / Brother-in-law, Terry Stikeleather of Statesville, NC; Sister / Sister-in-law, Ruth King of Angier, NC; Niece, Cathy Powers (Kenny) of Statesville, NC; Nephews, Chris Warren (Brittany) of Mooresville, NC and Brad Stikeleather (Jennifer) of Raleigh, NC; Great Nieces, Briana Kent and Vivienne Warren; Great Nephews, Elijah Kent (Jacqueline), Zachary Benge, Michael Powers and Cody Powers; Great, Great Nephew, Grayson Kent and Great, Great Niece Emily Kent. A memorial service will be held 3:00 PM on January 29, 2022 at Horizon Church, 316 Signal Hill Drive, Statesville, NC 28625. The family will receive friends following the service at the church. In lieu of flowers please make donations to the following organizations of your choice or Gordon’s Hospice House of Statesville, NC, Lake Norman Humane Society, Mooresville, NC, and the Monticello Fire Department, Statesville, NC. The family would like to make a special thank you to everyone at Davis Regional Medical Center, Maple Leaf Healthcare, and Gordon’s Hospice House for the lovely care provided to both Tommy and Belle during their final days. Also, we would like to thank the Monticello Fire department Tommy and Belle both loved and thought the world of everyone there. Nicholson Funeral Home is assisting the family.

Tommy Ray Bowles Sr. passed away January 18, 2022 and was followed in eternal rest by his beloved wife Belle Stikeleather Bowles January 19, 2022. Tommy and Belle were joined in marriage on July 1st, 1972. Their love with each other was truly... View Obituary & Service Information

The family of Mattie Belle Bowles created this Life Tributes page to make it easy to share your memories.

Send flowers to the Bowles family.