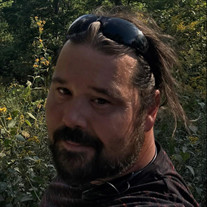 John Michael “Mike” Clanton, 37, of Statesville, died Monday, November 25, 2019. Mike was born on October 19, 1982 in Iredell County to Johnnie R. Clanton and Sue Williams Clanton. Mike was a graduate of West Iredell High School, Caldwell Community College and Appalachian State University, attended Zoe Life Bible College and was employed by L. Gordon Iron and Metal as a lead crane operator. Mike was a true outdoorsman and enjoyed hunting, four-wheeling and jet-skiing. He had a passion for music and loved to play his guitar. In high school he played a multitude of sports. Mike had a heart for helping others and never knew a stranger. His dream was to move to the family farm and be a dairy farmer. More than anything else, he loved spending time with his wife and children. He was preceded in death by his paternal grandparents; Raymond and Reba Clanton, and his maternal grandparents; Homer and Betty Williams. On April 27, 2013 he married the former Robin Queen who survives, along with his 2 daughters; Chloe Clanton and Eleighana Clanton. Other survivors include his father; Johnnie R. Clanton (Katy) and mother; Sue Williams Clanton, his mother-in-law, Peggy Plyler (Phillip), father-in-law; Roger Queen, 2 stepsisters; Tracey Bell and Nicole Bumgarner, sister-in-law; Kelly Lackey (Michael) and Casie Anderson and many aunts, uncles, nieces, nephews and cousins. Funeral Services for Mike will be held Tuesday, December 3, 2019 at 3:00 pm at Taylor Springs Baptist Church with Pastor Charles Williams and Pastor Jason Bost officiating. He will lie in state for one hour (from 2:00 to 3:00) prior to the service. Burial will follow in the Taylor Springs Baptist Church Cemetery. The family will visit with friends in the Fellowship Building after the burial. In lieu of flowers, the family asks that memorials be made to State Employees Credit Union to the College Fund for Chloe Clanton and/or Eleighana Clanton, c/o Robin Clanton, Trustee, 767 Eastside Dr., Statesville, NC 28625. Fond memories and condolences may be left at www.nicholsonfunerals.com and these will be made into a book for his daughters. Nicholson Funeral Home is serving the Clanton family.

The family of Mike Clanton created this Life Tributes page to make it easy to share your memories.