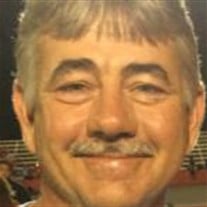 Ricky Lynn Millsaps Jr, 50 of Statesville passed away peacefully, surrounded by his family on Sunday March 1, 2020 following a very courageous battle with Pancreatic Cancer. Ricky was born on Friday December 5, 1969 to Ricky Sr and Barbara Gryder Millsaps, who survive. He was a graduate of North Iredell High School, Class of 1988. On May 23, 1992 he married his High School sweetheart, Tandra Rupard Millsaps, who also survives. Together they shared almost 28 wonderful years together. Ricky was a member at Rocky Hill Baptist Church. In September of 1987 Ricky went to work at JC Penney Distribution Center in Statesville and retired after 24 years of service to pursue his dream of running his own business. At a very young age Ricky was taught the art of ‘tree trimming’ by his Grandfather John W. Gryder who preceded him in death. The two of them spent countless hours together working and enjoyed every minute. While working at JC Penney Ricky would work afternoons and weekends with his grandfather trimming trees. The ‘side’ business grew so busy that Ricky said; “I really don’t have time to go to JC Penney today.” So in 2011 he created; Ricky Millsaps Tree Works Plus. He was very successful and enjoyed all the customers that he built relationships with over the years. Ricky loved the outdoors. Hunting and fishing were two of his favorite past times. He was a family man and enjoyed spending time with them. Ricky was a man of integrity. He said what he meant and he meant what he said. He touched the lives of many and will be greatly missed by all who knew and loved him. He was preceded in death by his grandparents; John Gryder, Talmadge and Carrie Millsaps and his Father-in-Law Charles Rupard. In addition to his wife and parents those left to cherish his memory are his children; Caroline Grace Millsaps and Justin Traver Millsaps, both of the home. His sister, Shellie Steele, his niece, Reagan Steele, his grandmother Aileen Gryder, his mother-in-law Ann Rupard, very special friends Joe and Sue Williams along with numerous aunts, uncles and cousins. The family will receive friends on Friday evening (March 6) from 6:00-8:00pm at Rocky Hill Baptist Church. Funeral services will be held on Saturday (March 7) at 2:00pm at Rocky Hill Baptist Church. A private burial will follow at a later date. In lieu of flowers, Ricky request that donations be made to St Jude Children’s Hospital in Memphis TN, Gordon Hospice House, Simonton Rd, Statesville NC or plant a tree in his honor. The family wishes to express their sincere thanks to the amazing staff at Lake Norman Oncology, Hospice of Iredell County and at Gordon Hospice House for the care and compassion shown to Ricky during his illness. Nicholson Funeral Home is serving the Millsaps family.

The family of Mr. Ricky L. Millsaps Jr. created this Life Tributes page to make it easy to share your memories.

Send flowers to the Millsaps family.