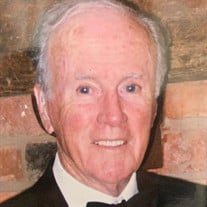 Anthony “Tony” Richard Ferguson, 92, of Statesville passed away December 25, 2021 at Gordon Hospice House. He was born February 6, 1929 in Liverpool England the son of the late Patrick Joseph and Rose Higgins Ferguson. He was preceded in death by two sisters, Frances and Anne, and his first wife of 46 years, Columba Coffey of County Mayo, Ireland, who passed in 2003. In 1939 at age 10, Tony was evacuated out of Liverpool to the safer countryside where he and his seven siblings escaped the bombing in the city during WWII. At 14 he became ill with Rheumatic Fever which developed a hole in the mitral valve of his heart. After many prayers his heart was miraculously healed. At age 18, he joined the Royal Air Force of England. He was stationed in Germany and worked on the Berlin Airlift, servicing the aircrafts. After the war, Tony returned to England where he met and married his first wife Columba. They moved to the United States, lived in Chicago for 19 years and were blessed with four children. In 2002 they moved to Statesville, and following the passing of his wife Columba in 2003, he was able to find love again with Sally Falls. They married in 2005. Tony was a devoted member of St. Philip the Apostle Catholic Church and a 4th degree Knight of Columbus. He had a strong work ethic, was an excellent ballroom dancer, enjoyed reading, playing chess, ping pong and pool and was, as his family lovingly described, “a ruthless cheater in cards and dominoes”. Left to cherish his memory are his wife of 17 years, Sally Ferguson; Tony’s children: Marcel Gajownik (Glenn), Liam Ferguson, Patrick Ferguson (Nancy), Tony Ferguson Jr. (Valerie), Sally’s children: Merritt Orr (Laney), Deke Falls (fiancé Erin); grandchildren: Veronica, Joey, Sean, Emma, Anthony III, Patrick, Kevin, Sarah Phillips, Laney, Elizabeth and Eliot; also considered grandchildren are the children of Bob and Veronica Stein - Natalie, Evelyn and Lena; sisters, Pat, Rita and Joan; brothers, Colin and Kevin; and a host of other beloved family and friends. The family will receive visitors from 6 until 8 PM Wednesday, December 29, 2021 at Nicholson Funeral Home with a Rosary starting at 5:20 in the Chapel. A Funeral Mass will be held on Thursday, December 30 at 11 AM at St. Philip the Apostle Catholic Church, 525 Camden Drive , Statesville, NC. Burial will follow at Oakwood Cemetery in Statesville. After leaving the cemetery, a Bereavement Luncheon will be held at St. Philip’s in the new Social Hall. Memorials may be made to Gordon Hospice House of Statesville, or “Forward with Christ” Building Campaign at St. Philip the Apostle Catholic Church. Please share memories and condolences with the family at www.nicholsonfunerals.com

Anthony &#8220;Tony&#8221; Richard Ferguson, 92, of Statesville passed away December 25, 2021 at Gordon Hospice House. He was born February 6, 1929 in Liverpool England the son of the late Patrick Joseph and Rose Higgins Ferguson. He was preceded... View Obituary & Service Information

The family of Anthony "Tony" Richard Ferguson created this Life Tributes page to make it easy to share your memories.

Send flowers to the Ferguson family.