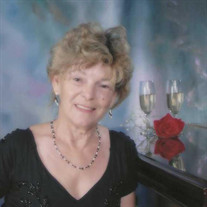 Arlene Maynard Burgess, age 76, of Statesville, passed away peacefully on Monday, April 18, 2022, at her home. Born on March 27, 1946, in Charleston, West Virginia, she was the daughter of the late Sherrell Maynard and Lovie Baisden Maynard. In... View Obituary & Service Information

The family of Arlene Maynard Burgess created this Life Tributes page to make it easy to share your memories.

Send flowers to the Burgess family.