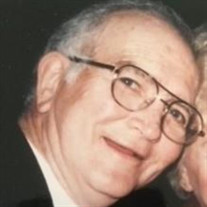 On March 2, 2021, Clarence Leon Beckham passed away peacefully at his home in Dayton, Ohio. Leon was born on January 12, 1937 in Iredell County and attended Central High School. He joined the United States Air Force at the age of 17. After a 21- year career as Master Sergeant in Strategic Air Command units throughout the US, Canada, Germany, Thailand and Guam, the family settled in Dayton, Ohio, where he has resided for more than 40 years. Leon had a successful second career with the Bayer Corporation. While stationed in Orlando, Florida, he met the love of his life, Patricia (Patti) Olds. Leon remembers sitting on the beach while reading “From Here to Eternity” when a pretty girl, Patti, asked him to share his blanket with her. They celebrated their 60th wedding anniversary before her death in 2019. Leon loved his country, his family and especially all those who served along with him in the military, and was a faithful son to his parents, Rev. Lester and Gladys Beckham, who predeceased him. Leon telephoned his parents weekly, always on Saturday morning. He was a loving brother to his four sisters, Nancy (John) Cook, who predeceased him, Katie (Patrick) Giblin, Phyllis (Jim) Cagle, and Lisa (Jim) Schumacher. Mr. Beckham is survived by his devoted daughter, Priscilla Lynne Beckham and son, Mark (Peggee) Beckham, all of Dayton, Ohio. Never forgetting his roots in Iredell County, he will be interred alongside his wife and parents at Ham’s Grove Baptist Church. A graveside service, with military honors, will be held on Saturday, March 6 at 11 am at Ham’s Grove. Rev. Carl Williams will officiate. After the service, the family will adjourn to the Cook residence at 2808 Findley Road to greet family and friends. Nicholson Funeral Home is serving the family.

On March 2, 2021, Clarence Leon Beckham passed away peacefully at his home in Dayton, Ohio. Leon was born on January 12, 1937 in Iredell County and attended Central High School. He joined the United States Air Force at the age of 17. After... View Obituary & Service Information

The family of Clarence Leon Beckham created this Life Tributes page to make it easy to share your memories.

Send flowers to the Beckham family.