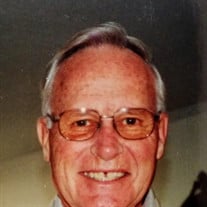 David Efird Rhyne, 87, of Statesville, NC, passed away at his daughter’s home in Virginia on November 21, 2020. David came to live with his daughter and son-in-law in 2019 following a stroke. David was born December 14, 1932 in Stony Point, NC, and was the son of the late Joseph Reid Rhyne and Beulah Combs Rhyne. He was employed by the Great Atlantic and Pacific Tea Company. He retired in 1993 after having served as manager for 40 years. David loved to play tennis at Caldwell Park and so enjoyed the camaraderie of his many friends. David also loved gardening, fishing, and working with wood. In addition to David’s parents, he is preceded in death by his beloved wife of 59 years, Barbara Kelley Rhyne, who passed away in 2011, a sister, Eloise Wilson, and a brother, Howard Rhyne. David is survived by his two children, daughter Barbara, and husband Dr. Jim Culley of Pearisburg, VA, and son David, and wife Victoria Rhyne of Sarasota, FL; a granddaughter, Jennifer and husband Dr. Jonathan Roberts, and two great grandchildren, Luke and Kendall Roberts, of Richmond Hill, GA; and two brothers, William “Bud” Rhyne, and Wade Rhyne. Graveside services will be held at a later date (to be announced) due to COVID-19.

The family of Mr. David Efird Rhyne created this Life Tributes page to make it easy to share your memories.

David Efird Rhyne, 87, of Statesville, NC, passed away at his...

Send flowers to the Rhyne family.