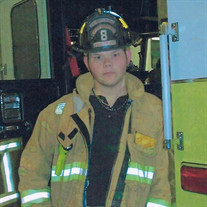 Derek Eugene Poole, age 35 of Statesville, passed away on August 9, 2021 at Atrium Health – Cabarrus in Concord. Born on December 30, 1985 in Iredell County, he was the son of Tony Eugene Poole and Martha Jane Teaster Poole. Derek was always “full of life.” He was a graduate of West Iredell High School and attended Mitchell Community College. Growing up Derek had a love for fire trucks and when he was able, he stepped into “his calling” to become a Firefighter. In January of 2006, Derek joined the Catawba Fire Department where he was Rookie of the Year. In 2007 he received the prestigious honor of being awarded Firefighter of the Year. Derek went on to further his career by joining the West Iredell Fire Department in 2008. Derek enjoyed his “fire family” as he called them and loved spending time with his family, especially at family gatherings. Derek enjoyed listening to classic rewind music from the 70’s, 80’s and 90’s which included Bob Seger, Whitesnake, Kansas, Rush, Neil Young, and Journey. He also had a love and passion for listening to his scanners and the ECOM calls that would come in. Derek was preceded in death by his siter, Misty Von Teaster; and his uncles, David Teaster and Carl Teaster. Those left to cherish his memory include his parents, Tony and Martha Poole; his aunts and uncles, Nancy and Bill Martin, Mary Pruitt, Hattie and Doc Cauldill, Harold and Naoma Teaster, Sandy and Jeff Stewart, and Janice Poole; many cousins; and his dog named “Baby.” Derek will lie in state from 12:00 pm to 4:00 pm, Friday, August 27, 2021 at Nicholson Funeral Home where friends and family can share memories of Derek. The family will also receive friends from 11:00 am to 12:00 pm on Monday, August 30, 2021 at Nicholson Funeral Home. A graveside service will follow at 1:00 pm, Monday at New Bethany Baptist Church, 106 Eufola Rd., Statesville. In lieu of flowers, memorial contributions may be made to Catawba Volunteer Fire Department, 108 N. Main St., Catawba, NC 28609 or to the West Iredell Fire Department, 2136 Old Mountain Rd., Statesville, NC 28625. Nicholson Funeral Home has the honor of serving the family. Online condolences may be sent to the family at www.nicholsonfunerals.com.

Derek Eugene Poole, age 35 of Statesville, passed away on August 9, 2021 at Atrium Health &#8211; Cabarrus in Concord. Born on December 30, 1985 in Iredell County, he was the son of Tony Eugene Poole and Martha Jane Teaster Poole. Derek... View Obituary & Service Information

The family of Derek Eugene Poole created this Life Tributes page to make it easy to share your memories.

Derek Eugene Poole, age 35 of Statesville, passed away on August...

Send flowers to the Poole family.