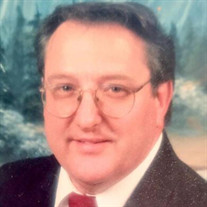 Rev. Donald “Don” Lynn Pierce, 64, of Statesville, went home to be with his Heavenly Father on Tuesday, August 25, 2020 surrounded by his family. Don was born in Iredell County on December 5, 1955 to Phyllis H. Clarke and the late Clyde Grady Pierce. He was a graduate of Iredell County schools and on December 31, 1975 he married Jackie Deal Pierce and together they shared 44 years of marriage until his passing. Don enjoyed nature and old cars. He found comfort in working in his garden. He was a dedicated husband, father, and grandfather. Don instilled Godly values in his sons and grandsons. His love for his fellow man was the driving force for his unwavering faith and dedication of sharing the Gospel of Jesus Christ. In addition to his wife Jackie and mother Phyllis, Don is also survived by two sons, Seth Pierce (Rebekah) and Brian Pierce (Megan), both of Statesville along with five grandsons, Shawn, Bradley, Zachary, Brandon, and Luke Pierce. He is further survived by two brothers, Ronald Pierce and Grady Pierce and four sisters, Kathy Hutto, Debbie Pierce, Joy Greenhalph, and Peggy Lindsey. His brother-in-law Mike Deal (Jeannie) and sister-in-law Tammy Shephard (Brodrick) also survive. Funeral services honoring the life of Don Pierce will be conducted at 11:00 AM Saturday, August 29, 2020 at Truevine Worship Center with Rev. Barbara Bunton and Pastor Rik Hamrick officiating. Burial will follow in Beulah Baptist Church Cemetery. The family will visit with friends from 6:00 until 8:00 PM Friday at Nicholson Funeral Home. His grandsons along with Justin Mayberry and Josh Bunton will service as active pallbearers. Online condolences can be made to the family at www.nicholsonfunerals.com and Nicholson Funeral Home is honorably serving the family of Don Pierce

The family of Rev. Donald "Don" Lynn Pierce created this Life Tributes page to make it easy to share your memories.

Send flowers to the Pierce family.