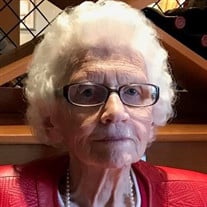 Doris Rebecca Hoyle Lingerfelt, 96, of Statesville passed away peacefully at Elmcroft Assisted Living in Salisbury on February 24, 2021. Born in Fallston, NC on December 8, 1924, she was the daughter of the late Clarence Lee Hoyle and Johnny Gantt Hoyle where she grew up working on their family farm. Doris was a 1942 graduate o¬f Fallston High School. She retired at the age of 85 from Statesville Auto Auction where she worked for 33 years processing car titles. Before that, she worked several different jobs in a cotton mill, elementary school and daycare. Doris was a hardworking lady her entire life. Doris was an active member of First Baptist Church in Statesville where she was a member for 59 years. She also volunteered as a pink lady at Iredell Memorial Hospital. Doris enjoyed spending time shopping and going out to eat with family and friends. She also loved playing card games such as bridge, rook and rummikub. She was an excellent cook and an immaculate housekeeper! Doris was an avid sports fan and loved watching her beloved Tarheels the most! She also loved to travel. She enjoyed camping trips with her husband, beach trips with her family and trips to Cherokee or Branson, Missouri with her three sisters. In addition to her parents, she was preceded in death by her husband Omar Lingerfelt, her sister Ann Southards and her brother Hal Hoyle. Doris is survived by her daughter Delores Thomas-Teague and husband Rock; her son Stuart and wife Karin Donalds; her granddaughters Julie Whicker (Thad), Carlee Hyland (Justin) and Marlo Mazhari (Nima); her grandson Brent Dickson; her great grandchildren Preston & Peyton Whicker and Leo Mazhari. Doris is also survived by her 2 sisters Melba Fore and Nancy Hoyle. She is also survived by numerous nieces and nephews. A Celebration of Life Service will be held Sunday, February 28, 2021 at 2:00 pm at First Baptist Church with Dr. Nelson Granade officiating. The family will speak with friends following the service in Adams Hall. The family wishes to thank all of the staff at Elmcroft Assisted Living Facility and all the representatives of Novant Rowan Hospice. They treated Doris with the utmost dignity and respect allowing her final days with her family to be as meaningful as possible. In lieu of flowers, memorials may be made to First Baptist Church of Statesville, 815 Davie Ave., Statesville, NC 28677 or Novant Rowan Hospice, 1229 Statesville Blvd., Salisbury, NC 28144. Nicholson Funeral Home is serving the Lingerfelt family. Condolences may be left at www.nicholsonfunerals.com.

Doris Rebecca Hoyle Lingerfelt, 96, of Statesville passed away peacefully at Elmcroft Assisted Living in Salisbury on February 24, 2021. Born in Fallston, NC on December 8, 1924, she was the daughter of the late Clarence Lee Hoyle and Johnny... View Obituary & Service Information

The family of Doris Hoyle Lingerfelt created this Life Tributes page to make it easy to share your memories.

Send flowers to the Lingerfelt family.