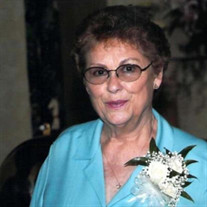 Doris C Morgan, 88, passed away Monday, February 14, 2022 at Springs of Catawba in Hickory, NC. Born February 27, 1933 in Winston-Salem, NC to J. Dorsett Campbell and Jettie W. Campbell, she was the youngest of three children. John Morgan husband of 64 years, her parents, brother Richard Campbell and half brother Harold Campbell preceded Doris in death. Her son Steven Morgan and partner David of Granite Falls; daughter Denise Howard and husband William of Blowing Rock; and son Derek Morgan and wife Paige of Troutman survive Doris. She was blessed with five grandchildren Christina Morrison, Ryan Feimster, Brandon Feimster, Teryn Morgan, Jake Morgan; step grandchildren Ross Howard and wife Laura and Jack Howard; and great grandchildren Alexis Morrison, Emma Howard, Declan Morrison and Olivia Howard. Doris enjoyed a long retirement after working as an accountant for a private company in Statesville. She was an avid gardener who loved cultivating plants and flowers, enjoyed spending time with her grandchildren and spending time outdoors with her husband. The family will hold a private celebration of her life on what would have been her 89th birthday, in Statesville, NC on Sunday, February 27, 2022. In lieu of flowers, memorials may be made to the West Iredell Fire Department at 2136 Old Mountain Road, Statesville, NC 28625. Condolences may be sent online to the family to www.nicholsonfunerals.com. Nicholson Funeral Home is serving the family.

The family of Doris C. Morgan created this Life Tributes page to make it easy to share your memories.

Send flowers to the Morgan family.