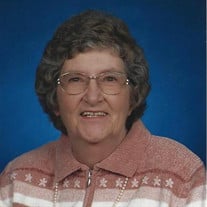 Mrs. Edith Harris Bell, 87, of Statesville, died Wednesday, January 29, 2020 at the Gordon Hospice House. Born in Iredell County on September 7, 1932, she was a beloved daughter of the late James Leonard Harris and Muriel Marie Frazier Harris. In addition to her parents, she was preceded in death by her husband, Bobby Eugene Bell on June 17, 2006 and a brother, W. Elvin Harris on June 1, 2012. She was retired from Iredell-Statesville Schools and was a member of Rose Chapel United Methodist Church. She is survived by her son, Steven (Rhonda) Bell; her daughter, Beverly (Allen) Etheridge both of Statesville; bonus son, Robb (Martha) Bell of Claremont, CA; grandchildren, Travis (Chelsea) Marion of Indianapolis, In, Douglas (Shannon) Marion of Cornelius, Melissa Marion of Statesville, Ashlyn Bell of Statesville, Jessica Wright of Mocksville, Matt Bell and Lindsey Bell of Claremont, Ca and great-grandchildren, Jaxon Bell, Brody Wright, Cole Johnson. A celebration of life service will be held at a later date. Memorials may be given to Highland Canine Training, 145 Foxfield Dr. Harmony, NC 28634. Nicholson Funeral Home is entrusted with the arrangements.

The family of Mrs. Edith Harris Bell created this Life Tributes page to make it easy to share your memories.

Send flowers to the Bell family.