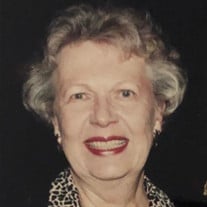 Esther Hyde Smith Balatow, formerly of Hickory, North Carolina, joined her husband of 53 years, John, in heaven, June 14, 2020. Esther was born in Buffalo, NY on May 5, 1931, to William Spooner Smith and Mildred Bisgrove Smith. She lived in Buffalo for a short time and grew up on Woodbrook Farm in Derby, NY. Like her mother and sister Sue, she became an avid horsewoman and loved life on the farm with the dogs and woods. After graduating from Bennett Junior College, Esther working in local schools until marrying John Balatow on July 30, 1955. Esther and John started their family in Buffalo where they had their two sons, William (Bill), of Statesville and Robert (Bob), of Hickory. Esther and John moved to Lenoir, NC in 1963 after a few years in Buffalo and a year in Cleveland, OH. Esther was very fond of opening up the family home for furniture market parties each April and October to make the buyers and guests visiting John’s showrooms, and North Carolina, feel a little more at home. While raising her sons in Lenoir, Esther served in the Junior League and at the local thrift shop. After some riots in Lenoir in the late 1960’s, Esther served on the (then named) Race Relations Council, to try and open a dialogue and ease tensions in the community. Esther and John were members of St. James Episcopal Church in Lenoir, NC, where they raised their boys. After John became national sales manager of Conover Chair Company, Esther and John moved to Hickory and became members of St. Albans Episcopal Church for over 40 years. While her sons were in college, she became a Realtor with Century 21 in Lenoir and later with Shook and Tarlton Realtors in Hickory. Esther served as both a Realtor and Broker in Charge at Shook and Tarlton, and retired from the firm in 1996. She might have worked a few more years, but retired to spend more time with John and her grandchildren. Esther loved her daughters in law, Inga (Bill) and Yvette (Bob) and only referred to them as her daughters. She was blessed by and doted on her 5 grandchildren, Claire, Win, Pearson, Isabella, and Reid. Esther and John lived for 40 years at Westminister Park Townhomes in Hickory, and loved having the grandchildren over to swim in the pool and play in the big side yard by their home. Esther’s favorite family meal to prepare was always the standing rib roast at the family Christmas dinner. Esther and John Balatow were married for 53 years and set a great example for their children and grandchildren. Esther and John both grew up playing tennis and taught the game to both of their sons. Family doubles were a regular occurrence on vacations and weekends, and Esther always helped with her sons’ travels with teams for matches. How her sons felt about John and Esther’s parenting can be summed up by one of Esther’s favorite verses from a poem written for hers and John’s 50th anniversary. “Bob and I were lucky to have learned about life, from the caring and wisdom of this man and wife.” The Balatow Family is extremely grateful for the wonderful care Esther received for many years at Preston House Memory Care in Charlotte. We are also grateful for the assistance of Nicholson Funeral Home in making our mother’s final arrangements. There will be a family service and interment of ashes at St Alban’s Memorial Garden in Hickory where Esther will be laid to rest beside her beloved husband John.

The family of Ester Hyde Smith Balatow created this Life Tributes page to make it easy to share your memories.

Send flowers to the Balatow family.