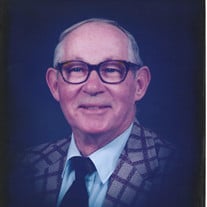 Frederick McCaskill Scarboro, 93, of Statesville, died on December 4, 2020, at home with his niece, Cheryl and her husband, Bill, by his side. Fred was born in Montgomery County, N.C. on July 30, 1927 to Floyd Spencer Scarboro and Ella Rae McCaskill. He was one of twelve children. Having spent his childhood in corn and tobacco fields, Fred had what he affectionately called "a full education in farming.” In the late 30's, he developed a talent for music with his brothers, Bill and Jack. Being particularly fond of string instruments, Fred went on to play upright bass and sing country gospel on the radio with the R.C. Ramblers. His most significant accomplishment was in songwriting. In 1958, inspired by his dreams of travel, Frederick recorded his first solo record with his song "Hula Dance" accompanied by The String Masters. He continued to share his music through visitation at churches, nursing homes and community functions for many years, including as a visiting musician on the Arthur Smith and Tommy Faile Show, a highlight of his musical tenure. Frederick was a devoted member of his church, Lighthouse Independent Methodist Church of Statesville, and held numerous roles over the years. He retired from Hoehst Celanese (formerly Fiber Industries) after a 30+ year career in the textile industry. But Frederick’s first love was his family. Fred settled in Statesville in 1956, where he married Bobbie Dean King, and they had a son, Jimmy Scarboro of Salisbury, N.C. Frederick played an integral part in the lives of his niece Cheryl and her daughter, great-niece Sarah, who often referred to him as her “substitute grandpa,” and many other members of his extended family. His impact on the lives of others is undeniable. As one of twelve children, he was well known as “Uncle Fred” by many family members and friends alike. Frederick leaves behind his son, Jimmy, grandchildren Matthew Scarboro of Salisbury, and Melissa Sorrells (Matthew) of Mt. Ulla, great grandchildren Drake, Kaitlyn and Kiera Sorrells of Mt. Ulla, nieces Cheryl Higgins (Bill) of Statesville, Radelle Hough of Wadesboro, Gretchen, Laura, Gail and Libby, great nephew Shane Hough, great nieces Sarah Higgins Zachry (Jim), Jennifer Puckett, great-great nephews (namesake) J. Fox Frederick Zachry and Chris Hough and many more beloved family and friends. He was preceded in death by his parents, his siblings, his nieces Amy, Arlene, Brenda and Linda, his wife, Bobbie Dean Scarboro, his daughter-in-law Amy Scarboro, and numerous others. The family extends a special "thank you" to Hospice nurse, Tita, who lovingly cared for Frederick until his final moments, as well as to Lynn Kunkle, Hospice Chaplain, and to Dr. Andy White. Frederick Scarboro will lie in state at Nicholson Funeral Home on Friday, December 11, 2020 from noon until 5pm, where friends are welcome to pay their respects. A private burial will be held at Oakwood Cemetery on Saturday December 12, 2020. "I want to leave you something. Something better than words, or sounds. Look for me in the people I've known, or loved...Love doesn't die, people do. So when all that's left of me is love, give me away. I'll see you at home, in the earth."-Merritt Malloy, Epitaph

Frederick McCaskill Scarboro, 93, of Statesville, died on December 4, 2020, at home with his niece, Cheryl and her husband, Bill, by his side. Fred was born in Montgomery County, N.C. on July 30, 1927 to Floyd Spencer Scarboro and Ella Rae McCaskill.... View Obituary & Service Information

The family of Frederick McCaskill Scarboro created this Life Tributes page to make it easy to share your memories.

Send flowers to the Scarboro family.