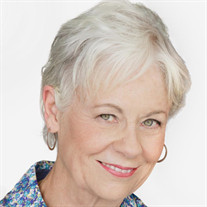 Ginger Gail Rabjohn Stephens, 79, of Statesville, passed away October 27th with her family by her side. Ginger bravely and gracefully dealt with the unexpected diagnosis and challenges of Primary Progressive Aphasia, a rare form of dementia, during the past few years. Although she was unable to verbalize her thoughts and feelings towards the end of her life, she remained aware and continued to be central in the lives of her family and dear friends. Ginger was born on November 26, 1940 to George Horace Rabjohn and Lois Driggers Rabjohn, in Kermit, Texas, where her father worked for Phillips Oil Company and her mother was a homemaker. In 1950, her family moved to Hamlin, Texas where she graduated Valedictorian of her class at Hamlin High School. Ginger attended Hardin Simmons College in Abilene, Texas and then transferred to Texas Tech University in Lubbock where she continued her romance with her high school classmate, Joe. Ginger graduated with a degree in Speech Education in June of 1963. Ginger and Joe were married on June 4, 1963 and moved to Decatur, Alabama where she worked as a Speech Therapist for the local school system and Joe worked as a Technical Service Rep for Chemstrand Corporation. Their daughter, Ginnifer was born a couple of years later. Joe’s career in the textile industry subsequently moved their family to Tarboro, NC, where their daughter Stephanie was born, then Lafollette, TN, Williamston, NC and finally to Statesville, where Ginger informed him that “the girls and I are staying here.” Ginger began her decades long career as a Speech Pathologist with the Iredell County Schools upon moving to Statesville. While she served many schools in Iredell County, she was based at East Iredell Elementary School and considered that her home and the staff at East as her family. She loved her “speech kids” and went above and beyond regularly to advocate for children with special needs and their families. Always wanting to know more and to better serve those needs, she obtained a Master’s degree in Education of the Hearing Impaired from Lenoir Rhyne College and a second Master’s in Speech-Language Pathology from Appalachian University, both while working full time and raising her daughters. After retiring from the Iredell-Statesville Schools, Ginger was able to use her speech skills again at American Renaissance Middle School where she worked part-time. She also pursued her love of art by painting in her studio and taking watercolor painting classes. While Ginger loved her profession, her co-workers and her “speech kids,” her greatest loves were her daughters, Ginnifer and Stephanie and her grandchildren, Ben, Abby and Luke. Her role as “Gaggy” was the absolute joy of her life! Gaggy adored her grandchildren and her unconditional love has been foundational as they have grown into adulthood. She made every holiday more special, every personal accomplishment and birthday a personal celebration and elevated common moments, just for fun. She taught us all how to be “extra.” Those who will miss her most, her husband of 58 years, Joe Bailey Stephens, Jr., her daughters Ginnifer Stephens Scott (Rhyne) and Stephanie Stephens Peters (Mark) and her grandchildren Benjamin Rhyne Scott (Sarah), Abigail Scott Collins (Chris) and Luke Brubaker Scott. The family gives thanks to Charlene Clower, Brenda Curry, Consynthia Barber and Len McNamara for their loving care that allowed Ginger to stay in the safety and comfort of her home. This was also made possible by the amazing care provided thru Hospice and Palliative Care of Iredell County, most especially by Laura Harris, RN and Shadese Griffith-McClelland, SW. We would also like to thank her dear friends Diane Parker and Joyce Jenkins for remaining close during her difficult days. A celebration of Ginger’s life will be held at 2 pm on Friday, October 30 at Oakwood Cemetery in Statesville, led by the Reverend Jeremy Cannada and the Reverend Anne Carpenter Galliher. There will be an opportunity to visit with the family after the service while following social distancing guidelines. In lieu of flowers the family requests that memorials to honor Ginger’s life can be made to the Field Trip Fund at East Iredell Elementary School, 400 East Iredell Dr, Statesville, NC 28625 or to Hospice and Palliative Care of Iredell County, 2347 Simonton Rd, Statesville, NC 28625. Fond memories and condolences may be left at www.nicholsonfunerals.com.

Ginger Gail Rabjohn Stephens, 79, of Statesville, passed away October 27th with her family by her side. Ginger bravely and gracefully dealt with the unexpected diagnosis and challenges of Primary Progressive Aphasia, a rare form of dementia,... View Obituary & Service Information

The family of Ginger Rabjohn Stephens created this Life Tributes page to make it easy to share your memories.

Send flowers to the Stephens family.