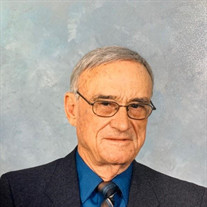 Mr. Grady Wayne Speaks, Sr., 91, of Statesville, died Monday, December 2, 2019 at his home. Born in Iredell County on December 4, 1927, he was the son of the late Garland Speaks and Louella Brooks Speaks. In addition to his parents, he was preceded in death by his wife, the former Marianna Johnson Speaks in 2018, a son, Philip Speaks in 1996 and a sister, Carolyn S. MacDaniels. Mr. Speaks was a self motivator. He sold cookware and books and was also a printer. He was a member of Abilene Church Of Christ and enjoyed bowling, music and golf. He served in the U. S. Navy and the U. S. Army having served in World War II. Survivors include two sons, Wayne Speaks and wife, Amy and Jeff Speaks, a daughter, Patty Summers and husband, Mickey, all of Statesville and a daughter, Liane Bender of Germany. He is further survived by his grandchildren, Rob Summers (Stephanie), Roxie Barnes, Cynthia S. Moore (Dwayne), Stephanie S. Brooks (Clay), Daniel Brown, Dany Bender (Sabine), and Denise Sester, (Daniel) along with great grandchildren: Michael and Kathryn Summers, Austin and Charlotte Moore, Nico and Celine Bender, Alisha Sester, Ryan and Liam Brooks, Madelyn and Gabrielle Barnes. A number of nieces and nephews also survive. Funeral services celebrating the life of Mr. Speaks will be conducted at 2:00 P.M. Saturday, December 7, 2019 at Abilene Church Of Christ with Minister Dave Olson officiating. Burial will follow in the church cemetery with military rites. The family will receive friends Friday evening from 6:00 to 8:00 P.M. at Nicholson Funeral Home. At other times the family will be assembled at the home. Condolences may be sent online to the family to www.nicholsonfunerals.com. Memorials may be given to the Cemetery Fund of Abilene Church Of Christ, 120 Bell Farm Rd., Statesville, N.C. 28625. Nicholson Funeral Home is entrusted with the arrangements. Mr. Speaks said “if you took the time to read this don’t forget to come sign the book”.

Mr. Grady Wayne Speaks, Sr., 91, of Statesville, died Monday, December 2, 2019 at his home. Born in Iredell County on December 4, 1927, he was the son of the late Garland Speaks and Louella Brooks Speaks. In addition to his parents, he was preceded... View Obituary & Service Information

The family of Mr. Grady Wayne Speaks created this Life Tributes page to make it easy to share your memories.

Send flowers to the Speaks family.