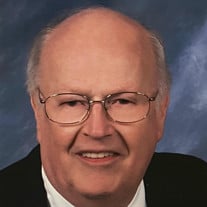 Harold A. Deal, Jr., loving husband, father and friend died peacefully on Saturday, September 12, 2020 at Gordon Hospice House in Statesville, NC. He will be sorely missed. Born in High Point, NC, he is the son of Harold A. Deal, Sr. and Louise Brown Deal, both deceased. He was educated in the public schools of Forest City, NC and at Vanderbilt University. In high school, he was president of both the senior class and the Boys Monogram Club. He also represented his high school (1949) as a delegate to Boys State at UNC- Chapel Hill. At Vanderbilt University, he was a member of Beta Theta Pi social fraternity and has been a long- time supporter of the National Commodore Club. In addition, he has been a long-time member of the Oak Leaf Society and the Beta Theta Pi Foundation. Professionally, Bud had a unique career. For more than 40 years his efforts focused on home furnishings, specifically fabrics and upholstery. His experience included sales, sales management and senior management responsibilities in both. Involved in both the NAFM (National Association of Furniture Manufacturers) and the SFMA (Southern Furniture Manufacturers’ Association), he assisted in the development of initial upholstery fabric standards. He was a member of the Upholstery Fabrics Committee with the American Textile Manufacturers Institute, Inc. and was also a member of the North Carolina Fabric Mens Association. Mr. Deal was preceded in death by his wife, Martha Jo Harrill Deal. Surviving are their three children: Richard B. Deal, MD (Beverly), M. Lynn Deal, Leigh Deal Fisher (Tim) and their children Casey and Cody. Additional survivors include two sisters, Nancy Deal Weaver and Betsy Deal Smith (Gil). A brother, William B. Deal, MD (April) died in March 2013. Several nieces and nephews as well as in-laws also survive. Mr. Deal was a lifelong member of the Presbyterian Church. A private graveside memorial service will be conducted at a later date at Cool Springs Cemetery in Forest City, NC. In lieu of flowers, memorials may be sent to the charity of the donor’s choice or to the Gordon Hospice House in Statesville, N.C., located at: Hospice and Palliative Care of Iredell County 2347 Simonton Road Statesville, NC 28625 PH: (704)873-4719 www.hoic.org

Harold A. Deal, Jr., loving husband, father and friend died peacefully on Saturday, September 12, 2020 at Gordon Hospice House in Statesville, NC. He will be sorely missed. Born in High Point, NC, he is the son of Harold A. Deal, Sr. and Louise... View Obituary & Service Information

The family of Harold A. "Bud" Deal Jr. created this Life Tributes page to make it easy to share your memories.

Send flowers to the Deal family.