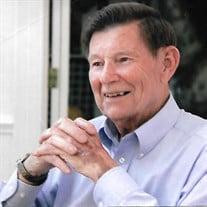 Herman Lacy Gillis, 87, of Statesville died Thursday, May 28, 2020 at his residence. He was born in Hoke County on January 17, 1933 to the late Percy Gillis and Ada Guin Gillis. He was also preceded in death by his siblings, Clyde Gillis, Luther Gillis, Louise Hord, Clara Mae Gillis and a grandson, Joseph Konen. Herman worked in the retail business for many years and retired as the Belk Department Store Manager in Wadesboro, NC. He also co-owned and operated Subway sandwich shops in Wadesboro and Albemarle NC with his son after retirement. He also opened Lacy’s Treasures, a gift shop in downtown Wadesboro. He was a member of First United Methodist Church in Wadesboro and served on numerous church committees. He then moved to Laurinburg, NC. During his 20 years in Laurinburg, he was a member of Laurinburg Presbyterian Church where he served as an Elder. He joined Forest Park Presbyterian Church in Statesville three years ago and was currently serving as an Elder. He especially enjoyed calling every church member at Forest Park on their birthday to show his appreciation for their life. Herman was passionate about his faith and service to the Lord. Herman lived his life in the service of others. He served on the Anson County School Board and served as Mayor Pro-Tem of the Wadesboro Town Council. He was a member of the Rotary and Lion’s Clubs, served on the American Red Cross Board of Directors, the American Heart fundraising committee and frequently assisted as a Boy Scout leader. Herman never met a stranger. Everyone was instantly comfortable in his presence. He valued a strong work ethic and was a role model for others. He enjoyed working in the yard and was a quietly competitive Phase 10 player. His smile, quit wit and hugs will be greatly missed by his family. Those left to cherish his memory are his wife of 49 years, Elsie Moore Gillis, a son, Arthur Newkirk III (Lucretia) of Cary NC, 2 daughters. Tammy Konen (Jim) of Fayetteville NC. Jane Hinson (David) of the home, 7 grandchildren, Merica Marengo, Shawn Konen (Christy), Will Konen (Leigh), Lacey McIntyre (Justin). Ashlyn Murray, Logan Newkirk, Luciana Newkirk, 5 great-grandchildren, Dominick Marengo, Vyctoria Marengo, Mason Konen, Cale Konen and Ellison McIntyre. A Memorial Service will be held on Saturday, June 6, 2020 at 2:00pm at Forest Park Presbyterian Church with Pastor Scott Jeffreys officiating. There will be no visitation to protect the health of others. The family would especially like to thank Tita Arciago, RN from Hospice & Palliative Care of Iredell County for her assistance in making him as comfortable as possible during his final day of life. In lieu of flowers, memorials may be made to Forest Park Presbyterian Church, 1026 Davie Avenue. Statesville, NC 28677 or Hospice & Palliative Care of Iredell County, 2347 Simonton Road, Statesville, NC 28625. Fond memories and condolences may be left at www.nicholsonfunerals.com.

Herman Lacy Gillis, 87, of Statesville died Thursday, May 28, 2020 at his residence. He was born in Hoke County on January 17, 1933 to the late Percy Gillis and Ada Guin Gillis. He was also preceded in death by his siblings, Clyde Gillis,... View Obituary & Service Information

The family of Herman Lacy Gillis created this Life Tributes page to make it easy to share your memories.

Send flowers to the Gillis family.