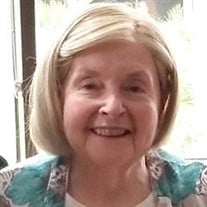 Mrs. Janis Kay Daniels Cashion, 79, of Statesville, went home to be with her Lord and Savior Jesus Christ on Sunday, April 11, 2021. She now resides in her glorified body in the presence of her Savior. Janis was born in Iredell County on June 16, 1941 to the late Carl Eller Daniels and Lela Plyler Daniels. She was a graduate of Iredell County schools and she attended Mitchell Community College. On August 8, 1958, Janis married Shirley Rayvon Cashion and shared 56 years of marriage before his death on January 9, 2015. Janis was retired from Iredell Memorial Hospital where she worked for 31 plus years as a ward clerk. She had a love for people which was the driving force behind her longevity with IMH. Janis' main passion in life was caring for her family. She loved and cherished her time with her sons, their wives, and her grandchildren. Although she will be missed deeply this side of Heaven, there is peace knowing she no longer suffers the pain and sorrow of this world because she is now in the presence of the Almighty. In addition to her husband, Janis was also preceded in death by a son, Jeff Cashion, and three brothers, Jerry, Arnold, and Carl Daniels along with one sister, Louise Hannon. Left to cherish her memory are her two son, Darryl Cashion (Chrissy) of Statesville and Michael Cashion (Laurie) of Conover and one daughter, Bari Lynn Ford of Statesville. She is also survived by three grandchildren, Jeffrey Cashion (Olga), Alisa Brennan (Rob), both of Myrtle Beach, SC, and Shane Cashion (Teresa) of Statesville. She is further survived by two great-grandchildren, Michael Larue Cashion, and Hazel Lee Ann Brennan, two sisters, Becky Keller (Jimmy) and Anne Shorts (Tom) and a brother-in-law, Olan Hannon. In order to honor the wishes of Janis Cashion, there will be no public services, but the family will hold a private gathering in the very near future to celebrate her life and memory. The family would like to extend their sincerest heartfelt appreciation to Dr. Joshi and Dr. Bouhussein along with Hospice & Palliative Care of Iredell for the love, care, and compassion shown to our dear mother during her journey. Your compassion will never be forgotten. IN lieu of flowers, memorials may be made to Hospice & Palliative Care of Iredell County, 2347 Simonton Road, Statesville, NC 28625, and Nicholson Funeral Home has had the honor of assisting the family of Janis Daniels Cashion.

Mrs. Janis Kay Daniels Cashion, 79, of Statesville, went home to be with her Lord and Savior Jesus Christ on Sunday, April 11, 2021. She now resides in her glorified body in the presence of her Savior. Janis was born in Iredell County on June... View Obituary & Service Information

The family of Janis Daniels Cashion created this Life Tributes page to make it easy to share your memories.

Send flowers to the Cashion family.