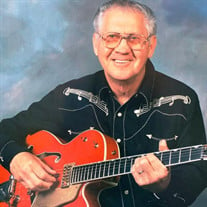 Mr. Jerry Roscoe Williams, 79, of Statesville, passed away unexpectedly on Wednesday, November 25, 2020 at his home. Jerry was born in Iredell County on August 25, 1941 and was the son of the late Harold Williams and Thelma Hurley Williams. He attended Iredell County Schools and on Jan 12, 1964 he married Mary Evadean Dishman Williams and together they shared 56 years of marriage before his passing. Jerry was a self-employed interior/exterior painter, which he thoroughly enjoyed. He enjoyed watching NASCAR. He was also a man who cherished his wife, children, grandchildren, and great-grandchildren. Jerry also had a passion for playing the guitar. At family gatherings, he often played music, entertaining everyone in attendance as well as being the life of the party. Jerry was also a faithful man to God and his church, Liberty Baptist Church. He will be missed by everyone who had the pleasure of his company. In addition to his parents, he was preceded in death by a brother, Bobby Williams. Left to cherish his memory is his wife, Mary Williams, two sons, Wayne Williams (Karen), and Darrell Williams (Dawn) along with two daughters, Marilyn Williams and Virginia Swan (Tim). He is also survived by 11 grandchildren, four great-grandchildren and one brother, Jimmy Williams and three sisters, Linda Tarlton, Cathy Poteat, and Sue Faust. Preceding him in death are his brothers, Bobby Williams, Michael Williams and Tony Williams. A service honoring the life of Jerry Williams will be conducted at 3:00 PM Sunday, Nov 29 at Liberty Baptist Church, 2430 Wilkesboro Highway, Statesville, NC 28625 with Pastors Roger Holland and Darrell Williams officiating. The family will visit with friends for one hour prior to the funeral service. Burial will follow in the church cemetery. Online condolences can be made to the family at nicholsonfunerals.com and Nicholson Funeral Home has the honor of serving the family of Jerry Williams.

Mr. Jerry Roscoe Williams, 79, of Statesville, passed away unexpectedly on Wednesday, November 25, 2020 at his home. Jerry was born in Iredell County on August 25, 1941 and was the son of the late Harold Williams and Thelma Hurley Williams.... View Obituary & Service Information

The family of Jerry Roscoe Williams created this Life Tributes page to make it easy to share your memories.

Send flowers to the Williams family.