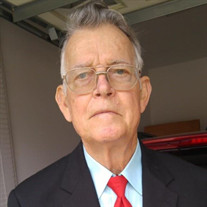 Jimmy Lewis Cline, of Statesville, passed into his heavenly home from the Gordon Hospice House, following a period of declining health. He was born in Drexel, to George H. and Ruby C. Cline. His father died in an accident in 1936. In 1941, his mother married James R. Hoover, who became Jimmy’s father and a constant source of stability and support. A 1954 graduate of Scotts High School, Jimmy pursued many hobbies involving electronics and mechanics. As a teenager, he designed and built ham radios, his own recording machine/vinyl record press (often recording his younger sisters singing), dirt bikes and stock cars. He even built and flew a manned airplane with a friend, landing in a local watermelon patch. After serving in the U.S. Army Reserves, Jimmy was employed by Southern Screw Manufacturing. After retirement, he worked for a number of years for Manheim Automotive Wholesaler. Even as an adult, Jimmy enjoyed constructing and flying model airplanes. His passion for stock car racing continued as well, building dozens of cars in his home shop. He competed in races from age 17 through his mid-60s, usually at the Hickory Speedway. Jimmy married Judy Dietz Cline June 28, 1986. She made a loving home for them, enabling him to enjoy married life and retirement. He was a life-long member of St. John’s Lutheran Church in Statesville, where he was baptized and confirmed. He is survived by his wife, Judy Cline of Statesville; sisters, Betty Stafford (Ken) of Winston-Salem and Joan Litton of Smith Mountain Lake, Va.; son, Terry Lewis Cline; stepdaughter, Jackie Hyams (Chuck) of Myrtle Beach, S.C.; stepson, Donald Dietz; granddaughter, Alison Wilson (Caleb) of Hickory; step granddaughter, Maddy Hyams of Myrtle Beach; and two great-grandsons. He also leaves his four-legged friend, Milo aka “Puppy”. The family will receive visitors Tuesday, Nov. 24, at 10:30 a.m., at St. John’s Lutheran Church, 740 N. Center St., Statesville, NC 28677. A service will then be held at 11 a.m., in the church, followed by burial in the family plot in Oakwood Cemetery. Guests should wear masks, and social distancing is encouraged. In lieu of flowers, memorials may be made to Hospice & Palliative Care of Iredell County, 2347 Simonton Rd., Statesville, NC 28625; or St. John’s Lutheran Church. Fond memories and condolences may be left at www.nicholsonfunerals.com

Jimmy Lewis Cline, of Statesville, passed into his heavenly home from the Gordon Hospice House, following a period of declining health. He was born in Drexel, to George H. and Ruby C. Cline. His father died in an accident in 1936. In 1941,... View Obituary & Service Information

The family of Jimmy Lewis Cline created this Life Tributes page to make it easy to share your memories.

Jimmy Lewis Cline, of Statesville, passed into his heavenly home...

Send flowers to the Cline family.