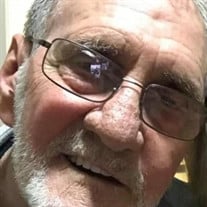 Johnny Leroy Cook, age 77, of Statesville, passed away Sunday, December 26, 2021 at Autumn Care of Statesville. Mr. Cook was born at Longs Hospital in Statesville, NC on May 4, 1944, he was the son of the late Garland Leroy and Catherine Louise Robbins. In addition to his parents, he was preceded in death by his wife, Nancy B. Cook; his son, Johnny Brian Cook; and a brother, Billy G. Cook. He attended Statesville High School and Mitchell College. Mr. Cook was employed by JPS (formally Uniglass) for 46 years as an electrician specialist. He enjoyed attending spring and fall Spiritual Retreats at Camp Grier Old Fort with a special group of friends and hated it so when his health no longer allowed him to attend. Those left to cherish his memory include his daughter, Rhonda (Ricky) Adams; step-daughters, Dawn Houpe (Oliver Mayfield), Alice (Bill) Robinson, and Jennifer Dagenhart; his grandchildren, Hannah Gilliland, Sarah Robertson, Tori Annas, Austin Cook, Catherine Cook, Rose & Lilly Houpe, Andy & Casey Robinson, Jacob Dagenhart; eight great-grandchildren; his brother, Frank Cook; his sisters, Carolyn Snow and Brenda Larkam; and his beloved dog, Shotgun. Rhonda always said he was happier to see his dog than any person. A special thank you to Jennifer for caring so well for Shotgun after his dad's stroke and for all the many trips for them to visit. The family would like to acknowledge Brookdale East Broad for their loving care for over two and a half years following Johnny's stroke. He considered this his home and was very content there and hated when the time came for him to leave for additional care. Mr. Cook will lie in state from 10:00 am to 2:00 pm on Friday, December 31, 2021 at Nicholson Funeral Home. A celebration of his life will be held at 3:00 pm, Sunday, January 2, 2022 in the Chapel of Nicholson Funeral Home with Pastor Carl Williams officiating. Nicholson Funeral Home has the honor of serving the family.

Johnny Leroy Cook, age 77, of Statesville, passed away Sunday, December 26, 2021 at Autumn Care of Statesville. Mr. Cook was born at Longs Hospital in Statesville, NC on May 4, 1944, he was the son of the late Garland Leroy and Catherine Louise... View Obituary & Service Information

The family of Johnny Leroy Cook created this Life Tributes page to make it easy to share your memories.

Send flowers to the Cook family.