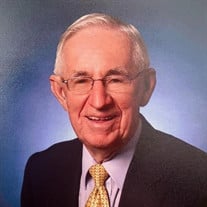 Joseph Robinson “Jay” Eller, 91, of Statesville and formerly of Ashe County, went to be with the Lord April 8, 2022, at the Gordon Hospice House in Statesville. He was born May 22, 1930 to the late William Guy and Bessie Rose Little Eller in Creston, NC. In addition to his parents he was preceded in death by his wife of 63 years, Shirley Ann Dollar Eller. Shirley was the love of his life. Left to cherish his memory are his daughter and son-in-law, Debbie, and Tim Burgiss of Statesville, NC; two granddaughters Drew Yang (Wilson) of Toronto, Canada, and Ali Lewis (Tyler) of Winston Salem, NC. Jay was blessed with two great-grandsons in 2021 that he adored, Nash Jordan Lewis and Eben Wei Yang. Also, Sister’s-n-law, Phyllis McNeil (Johnny), Josie Hoosier (Joe), Dorothy Eller, as well as several nieces and nephews also survive. Two others he treasured are his dear friend, caregiver and ‘partner in crime’, Shirley Brown and his beloved Sandy (Angel), his toy pomeranian that rarely left his side. Jay was also preceded in death by three brothers, Kelly (Maxine) Eller, Bob (Earlene) Eller, Bill Eller and two sisters, Ruth (Elmer) Farmer and Frances (Wesley) Goodman. Jay was a businessman that believed “you have to spend money to make money”! He did both as he worked hard from age 14. He drove heavy equipment, he sold produce & tobacco, he owned a gas station and country store, then he settled into the car business. Here he did what he loved most… sell, buy and trade. He owned Jay’s Used Cars. As he tired of traveling often to buy cars, he sold his lot and worked with Twin City Chevrolet in West Jefferson until he retired. When he retired, he and Shirley moved to Statesville to make their home near Debbie, Tim and those two precious granddaughters. He didn’t like retirement, so he started Jay’s Lawncare. He also went into the Christmas tree business and had Jay’s Tree Lot for over twenty years. Those who bought trees from him came back year after year because everyone loved Jay. There was always something in his yard to sell or trade. He could sell most anything. Often you would find campers or cars, but always golf carts. He bought and sold hundreds of them He never lost his love for tradin’. He sold his last golf cart a couple of months ago. All who met him immediately heard about his family and saw that he lived life to the fullest as he joked, laughed, and hugged everyone. He never met a stranger; he was a friend to all. He was also proud to have served his country in the US Army though it was a difficult time as he served overseas in combat. He was a member of the 26th Antiaircraft Artillery Automatic Weapons Battalion from 1953-1955. He was a decorated Korean War veteran. Jay loved his Lord & Savior Jesus Christ. He loved to tell others why they should know Him, too. He was a member of Diamond Hill Baptist Church where he served as a deacon. One hobby he enjoyed was horseback riding. He participated in horse shows, many at the Creston Riding Ring. He rode in the annual Wagon Train for many years. Another of Jay’s favorite things was cake. He attributed his long life to eating a good piece of cake every day! The hobby he loved most was camping. He and Shirley camped in many states and in Canada. They made numerous friends throughout their travels. They especially loved the years they camped at Lake Myers Campground in Mocksville, NC and at Greenfield Campground in Jefferson, NC. They camped with lifelong friends every weekend in both places. We would like to thank Sherrie’s In Home Care for the wonderful assistance they provided. The attention and care from each lady allowed Daddy to live at home which was his wish. Funeral services will be conducted on Monday, April 11, at 4:00 pm in the Nicholson Funeral Home Chapel, 135 East Front St., Statesville, with a visitation from 2:00-4:00 pm. Burial will follow at Oakwood Cemetery with Military Honors. The family will also receive friends on Sunday evening, April 10 at Boone Family Funeral Home, 2005 Mount Jefferson Rd, West Jefferson from 6:30-8:30 pm. Mr. Eller's Funeral Service can be viewed via LIVE Stream in the Chapel of Nicholson Funeral home at https://view.oneroomstreaming.com/authorise.php?k=1649722286177943 Memorial donations may be made to Samaritan’s Purse, PO Box 3000, Boone, NC 28607 or Gordon Hospice House, 2341Simonton Rd, Statesville, NC 28625.

The family of Joseph Robinson "Jay" Eller created this Life Tributes page to make it easy to share your memories.

Send flowers to the Eller family.