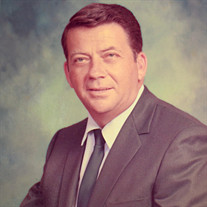 Loring Lee Fishburne, Sr. of Statesville, North Carolina, died peacefully at home on December 11, 2019 in the presence of his loving family. He was born to Alexander Gillon and Jane Owen Fishburne on November 8, 1926, in Sumter, South Carolina. The youngest of four, his siblings were Alexander Gillon Fishburne, Jr., Henry Burnett Fishburne, and Mary Jane Fishburne Harder. Mr. Fishburne attended The Citadel before enlisting in the United States Marine Corps. He served during WWII in the Pacific Theater. After the war’s end, he attended the University of South Carolina. He graduated from the National Hardwoods Lumbermen Association School in Memphis, Tennessee, and thereafter made his career in the hardwood lumber business. A cradle Episcopalian, Mr. Fishburne served on the Vestry at Trinity Episcopal Church, where he had been a member since the early 1960s. As Junior Warden, he was instrumental in the construction of Trinity’s Henkel Road church and in the blending of congregations from the Church of the Holy Cross and Trinity in 1968. Mr. Fishburne laid the corner Vestry stone during the building process. He also served as a Senior Warden and Lay Leader at the church. He was a charter member of the Duck Creek Gun Club and he served on the Salvation Army of Iredell County’s Board of Directors. Mr. Fishburne was an avid outdoorsman from youth. He was an amazing wing shot, and his fly-fishing presentation was unmatched. In addition to baking prize-winning pound cakes for family, friends, and neighbors, he enjoyed sharing them at the The Pecan Park Farmer’s Market. His story and recipes were included in the cookbook, “Red Pepper Fudge and Blue Ribbon Biscuits.” Later in life, he and his friends comprised Statesville’s “Brain Trust,” meeting each morning for coffee and conversation. He is remembered most for his enthusiastic embrace of life, his easy-going personality, and his devotion to church and family. Preceeded in death by his wife Ellen Murr Fishburne, he is survived by daughters Ellen Fishburne Triplett (Jeff), Margaret Fishburne Goldston (Bryan), and Carol Fishburne Pitts (Steve), and by his son and devoted caregiver, Loring Lee Fishburne, Jr. He leaves three grandchildren: Mary Susannah Goldston, Emily Lauren Goldston Perrine, and Brett Alexander Seats; three great-granddaughters: Lillian Grace Seats, Annabeth Claire Seats, and Ezra Goldston Perrine; and numerous nieces and nephews. The family will receive friends in Trinity Episcopal’s Holy Cross Room beginning at 2:00 p.m. on Sunday, December 15th with a service following at 3:00. Burial will follow at Oakwood Cemetery. In lieu of flowers, memorials may be made to Trinity Episcopal Church, 801 Henkel Road, Statesville, NC 28677; or Hospice and Palliative Care of Iredell County, 2347 Simonton Road, Statesville, NC 28625. Fond memories and condolences May be left at www.nicholsonfunerals.com. Nicholson Funeral Home is serving the Fishburne family.

Loring Lee Fishburne, Sr. of Statesville, North Carolina, died peacefully at home on December 11, 2019 in the presence of his loving family. He was born to Alexander Gillon and Jane Owen Fishburne on November 8, 1926, in Sumter, South Carolina.... View Obituary & Service Information

The family of Loring Lee Fishburne Sr. created this Life Tributes page to make it easy to share your memories.

Send flowers to the Fishburne family.