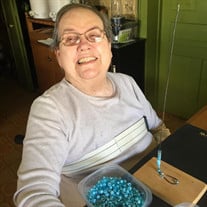 Ethel “Lynn” Mitchell went home to meet her Savior on April 30, 2020. She was born in Scott County, Virginia in 1947 to the late Tom and Marie Herron Flinchum. She was also preceded in death by a granddaughter, Lynz Glenn Mottinger. Her remarkable story of survival inspired everyone she met. Beginning with a near-fatal brain aneurysm in 1984, she went on to survive two strokes, two separate bouts of cancer and countless complications from medical problems and procedures before her cancer returned and ultimately took her life. Paralyzed on her left side and confined to a wheelchair, she was never apart from her faithful husband and caregiver, Eddy. Despite these terrible ordeals, she considered herself blessed and maintained an active ministry of testimony and service until her health finally failed her this year. She made beaded jewelry with her one good hand and gave away over 2000 pieces to various mission groups (who have shared her work in over a dozen different countries), Samaritans Purse, and to people on the street, sharing her testimony of God’s love and care for his children, even in their darkest hours. If you’ve ever been given a beaded necklace or bracelet from a sweet lady in a wheelchair, you have met Lynn. She is survived by her husband Eddy Mitchell, daughter Kelley Mitchell (Chris) of Statesville, Kim Campbell (Michael) of Statesville, granddaughters Darby Mitchell of Statesville, Remy Mottinger-Morrison (Daniel) of Statesville, great-grandchildren Abigail, Jackson, Mason, and Hadlee Morrison, one sister Beth Stamey (Dale) of Statesville, and one niece Tandra Stamey. She was also beloved by numerous aunts, uncles and cousins, her Lentz Rd. Community, and the congregation at Hebron Baptist Church. The family would like to thank her many faithful home health caregivers and Hospice and Palliative Care of Iredell County for all their help with her extensive care needs over the years. A Private Graveside service will be held for Lynn and a Memorial Service will be held later. In lieu of flowers Memorials may be made to Hebron Baptist Church, 175 Hebron Rd., Statesville, NC 28625, Hospice of Iredell County, 2347 Simonton Rd., Statesville, NC 28625 or Special Olympics, 2200 Gateway Centre Blvd., Ste 201, Morrisville, NC 28560. Fond memories and online condolences may be left at www.nicholsonfunerals.com.

Ethel &#8220;Lynn&#8221; Mitchell went home to meet her Savior on April 30, 2020. She was born in Scott County, Virginia in 1947 to the late Tom and Marie Herron Flinchum. She was also preceded in death by a granddaughter, Lynz Glenn Mottinger. Her... View Obituary & Service Information

The family of Lynn Mitchell created this Life Tributes page to make it easy to share your memories.

Send flowers to the Mitchell family.