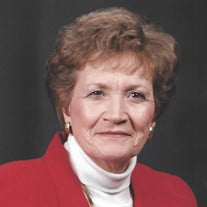 Mabel Gwendolyn Gryder Holland, aged 84, passed away on May 1, 2020, at the Gordon Hospice House in Statesville. Mabel was born May 7, 1935, in Iredell County and was the next to youngest child of the late William J. Gryder and Dovie Estelle Payne Gryder. Mabel grew up on the family farm with sister, Phyllis; and seven brothers, Clay, Jack, Harding, Hughes, Don, R.T., and Jim; and a large assortment of farm animals and pets. Following her graduation from Scotts High School, Mabel worked at various textile companies in Statesville. She met and married Burke Ray Holland. She loved meeting her “gang” she graduated with for lunch every month. She enjoyed sewing, water aerobics at Davis Hospital, reading, and playing sudoku, as well as planting flowers around her home. She especially loved visiting with her six granddaughters and four great grandchildren…and hearing what was going on in their lives. She made absolutely the best pound cakes, which were requested by family and friends. Many times, no request had to be made. Mabel would show up at a friend’s home with a freshly baked pound cake…just because. After retiring from Hanes/Bali where she worked in Quality Assurance, Mabel continued to serve her church and Sunday School in monthly projects. One project she especially loved was sewing children’s dresses for a foreign ministry. Mabel was recognized by her church for twenty years of managing its Sunday School Nursery. She had a special gift of caring for babies who are “precious in His sight.” Mabel was preceded in death by her husband, her parents and her brothers, and two of her daughters, Gwendolyn (1964) and Kathy (2009). Her memory will live on in her relatives, her church family, close friends, and many others. A Celebration of Mabel’s Life will be held on Saturday, November 21, 2020, at 2:30pm at Fairview Baptist Church, 349 Turnersburg Highway, Statesville, NC. In accordance with her wishes, she will be buried alongside her husband at the cemetery of South River Baptist Church. The family wishes to thank the members of Fairview Baptist Church and her many friends throughout the community for all their kindness towards Mabel. May God reward you greatly. Nicholson Funeral Home of Statesville is assisting the family with the arrangements.

Mabel Gwendolyn Gryder Holland, aged 84, passed away on May 1, 2020, at the Gordon Hospice House in Statesville. Mabel was born May 7, 1935, in Iredell County and was the next to youngest child of the late William J. Gryder and Dovie Estelle... View Obituary & Service Information

The family of Mabel Holland created this Life Tributes page to make it easy to share your memories.

Mabel Gwendolyn Gryder Holland, aged 84, passed away on May 1,...

Send flowers to the Holland family.