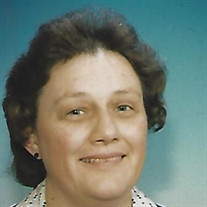 Margaret Yvonne Duncan Morrison, 83, of Winston-Salem, passed way peacefully on June 9, 2021. She had been in declining health for the last several months. Margaret was born on May 19, 1938 in Burke County, N.C. to Robert Everett Duncan and Ola Brittain Duncan. She later moved to Statesville, N.C. and graduated from Statesville High School in 1956. She met the love of her life, David Brady Morrison, while attending Mars Hill College in 1957. The two met under unusual circumstances- they were introduced to one another by Margaret’s roommate, Pat Campbell. It was a successful introduction, because Pat was the Matron of Honor at David and Margaret’s wedding in 1961, shortly after David’s discharge from the U. S. Army. The couple moved to Winston-Salem and recently celebrated their 60th wedding anniversary in January 2021. Margaret was a member of Clemmons First Baptist Church but most recently attended Agape Faith Church in Clemmons. She was a former employee of Walmart, where she worked in the fabrics and crafts department for a number of years. Margaret was predeceased by her parents as well as a brother, Lowell Ellis Brittain, formerly of Charlotte, N.C. She is survived by her devoted husband, David B. Morrison of the home, a son, Michael D. Morrison and his wife, Charlotte of Walnut Cove, N.C., a granddaughter, Elizabeth (Lizzie) Morrison of Walnut Cove and a brother and sister-in-law, Charles Sidney Morrison and Becky Norman and a nephew, Charles Sidney Morrison, Jr. of Clemmons, N.C. Margaret will lie in state at Nicholson Funeral Home on Sunday from 9:00 A.M. until 2:15 P.M. and then taken to the Concord Presbyterian Church Cemetery for a graveside service at 3:00 P.M. with Rev. Liz Troyer officiating. The family will greet friends immediately following the service. Condolences may be sent online to the family to www.nicholsonfunerals.com. Memorials may be given to Concord Presbyterian Church, 38657 Taylorsville Hwy., Statesville, N.C. 28625. Nicholson Funeral Home is entrusted with the arrangements.

Margaret Yvonne Duncan Morrison, 83, of Winston-Salem, passed way peacefully on June 9, 2021. She had been in declining health for the last several months. Margaret was born on May 19, 1938 in Burke County, N.C. to Robert Everett Duncan and... View Obituary & Service Information

The family of Mrs. Margaret Yvonne Morrison created this Life Tributes page to make it easy to share your memories.

Send flowers to the Morrison family.