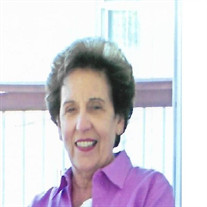 Mavis Surface Calabrese passed away Thursday, December 3, 2020 after a brief illness. Mavis was born December 5, 1934 in Monroe County, WV to the late P.H. and Daisy Wickline Surface. She attended and graduated from Monroe County Schools and Concord College in Athens, West Virginia, where she met her future husband James D. Calabrese. They wed on June11,1955 and were married for fifty-eight years before his passing in 2013. They and their young daughter moved to Statesville in 1960 where Mavis taught at Alan D. Rutherford Elementary and Wayside Elementary Schools for most of her teaching career. Survivors include a daughter, Susan Calabrese Wise, a son, Danny Calabrese, two granddaughters, Beth Wise Harris and husband Joey; Emily Wise, and a great-grandson, Sam Harris, all of Statesville. She is also survived by a sister, Martha Surface Young, of Radford Virginia and a host of nieces and nephews in Virginia, Georgia, Florida and West Virginia and Arizona. Mavis was of the Methodist faith and was a lifelong member of Waiteville New Zion Methodist Church in West Virginia. While living in Statesville, she attended Saint Philip the Apostle Catholic Church with her husband. Mavis' wishes were to be cremated. Due to Covid-19, no funeral services are planned at this time. Memorials may be made to St. Jude's Children's Hospital, either online or to 501 St. Jude Place, Memphis, TN 38105 or to Iredell Christian Ministries, PO Box 86, Statesville. NC 28687. Condolences may be sent online to the family to www.nicholsonfunerals.com. Nicholson Funeral Home is serving the family.

The family of Mrs. Mavis Surface Calabrese created this Life Tributes page to make it easy to share your memories.

Send flowers to the Calabrese family.