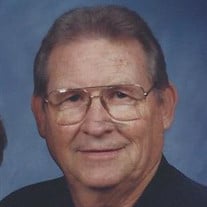 Paul Revere Harris, Jr. left this life peacefully October 27, 2019 to join the heavenly choir. Known affectionately his entire life as “Sonny”, he passed at the Gordon Hospice House at the age of 92. Born September 6, 1927, he was the first son of Paul Revere Harris, Sr., and Carrie Daniels Harris. Both preceded him in death. Growing up during the Great Depression, Sonny worked numerous jobs. He was a paperboy and also worked at the old Cooper’s Grocery on Boulevard. As a young man he wasn’t afraid of hard work and developed the work ethics he had his whole life. Later he would help his father pass out posters for elections. During that time, he became a Democrat, sometimes missing school to be at the polls with his dad. Whether the election was for county commissioner or President of the United States, he always believed it was important to vote. As a young man he was not a fan of academics, but was a natural athlete playing baseball and football for the Statesville Senior High Greyhounds. He was always a good sport and a mentor to young kids who wanted to play ball. As a football player as SHS he seemed to be able to always catch the ball, earning him the nickname “Sticky Fingers”. He was offered a full scholarship to play football at The Citadel, but he turned it down so he could marry the love of his life, Edith “Edie” Plyler Harris in 1947. Sonny and Edie shared 70 years of marriage until her passing in January of 2018. Later he joined the US Navy and was stationed in Norfolk, Va. onboard a destroyer, the USS Wren. He believed it was his duty and responsibility to serve his country. After returning to Statesville he went to work for Advance. Through the years he went from salesperson, to manager, to traveling merchandiser. He would see Advance grow into a national company becoming Advance Auto in the early 80’s. He worked for them over 50 years and won awards as manager of the year many times. Once during a company contest, he won a trip to the Bahamas. Part of the reason for his business success was that he treated everyone with respect and kindness. Many former employees have said he was a pleasure to work for. In the early days of the company customers could set up accounts, and Sonny often extended credit to people he knew had little money. At Christmas, the store was filled with toys and he was known to help others telling them, “Come in and get what you need, then come see me after New Years and we’ll work it out”. After fully retiring from Advance Auto he still wanted something to do, so he became a vendor at flea markets in Hickory, North Wilkesboro and Statesville. He sold antiques, old tools, vintage baseball gloves and Avon products for his wife. He enjoyed being a salesman, but mostly he simply enjoyed talking with people. Sonny was also a sports junkie. He enjoyed watching the Atlanta Braves, Duke basketball, Carolina Panthers, NASCAR (long time Richard Petty fan) and remained loyal to his SHS Greyhounds. Paul is survived by his daughter, Paula Harris Mason (GF) of Statesville, and sons, Tim L. Harris (Jan) of Chesterfield, S.C. and Marty P. Harris of Statesville. Also, grandchildren: Stephanie Mishoe, Christopher Johnson (Dedra), Emily Harris, Dayna Posada (Tony) and Maleia Mason. Also surviving are great grandchildren: Pepper Mishoe, Zeke Mishoe, Levee Courier, Colton Johnson, Bella Terblanche, Nisa Smith, Kaden Smith, Gabby Posada, Dante Posada, Aaden Harris and Ella Harris. He is also survived by a sister, Helen Mayfield (Gordon) and brothers, Melvin Harris (Shirley) and JD Harris (Marie) as well as many nieces, nephews and cousins. He always believed his family was the most important part of his life. He was a great husband, father and provider. He was appreciative for what he had, and yet his family always had what they needed and wanted. He loved to tell stories, jokes and enjoyed a good laugh. He taught his children right from wrong which came from his strong faith. Sonny was a lifelong member of Christ Boulevard United Methodist Church and served on various committees. He always enjoyed singing the old hymns and listening to them. The family will receive friends at Rocky Hill Baptist Church on Mountain View Road on Friday, November 1st from 1:30 until 2:45, followed by a celebration of Sonny’s life at 3:00. The service speakers are Rev. Joe Parker and Pastor Brent Price. The family extends their appreciation for the care given by Dr. James Foushee, the staff of Autumn Care and the staff of the Gordon Hospice House. We ask that any memorials be sent to Hospice & Palliative Care Of Iredell County, 2347 Simonton Rd., Statesville, N.C. 28625. At other times the family will assemble at the home of Paul and GF Mason. Fond memories and expressions of sympathy may be shared at www.nicholsonfunerals.com for the Harris family. Nicholson Funeral Home is entrusted with the arrangements.

Paul Revere Harris, Jr. left this life peacefully October 27, 2019 to join the heavenly choir. Known affectionately his entire life as &#8220;Sonny&#8221;, he passed at the Gordon Hospice House at the age of 92. Born September 6, 1927, he was... View Obituary & Service Information

The family of Mr. Paul Revere Harris Jr. created this Life Tributes page to make it easy to share your memories.

Send flowers to the Harris family.