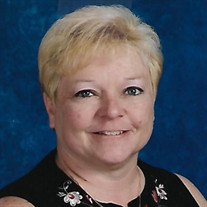 Paula Harris Mason joined her Jesus along with loved ones as she made her heavenly journey on Friday, September 10, 2021. Paula has fought a good fight. She had a rare blood cancer under the umbrella of myelodysplasia (MDS). This disease created many of her related health issues. As bad as she felt, and regardless of Paula’s lifestyle, she remained positive, inspiring others. Her humor and smile helped others, even strangers, cope with life. Paula’s strong faith in God allowed her to find strength, courage and compassion for others all her life. Paula graduated with honors from South Iredell High School in 1971 being an International Beta Club member, Junior Marshall and member and officer of many clubs. Paula also graduated from UNC-Charlotte in 1975 with a B.A. degree in Intermediate Education. After graduation from UNCC, she was hired by ISS to teach at Central Elementary School. She loved her career and remained there until her retirement 32 years later. Paula loved and respected her “Central Babies” as she affectionately called them, until her death. Paula taught full circle by teaching children of her former students. She always said, “I’m having so much fun I should be paying them for this opportunity”. She successfully taught 32 years by gaining the respect and love of her kids. If you succeed with this, the student will be successful and show growth. Over her teaching career she was Central Teacher of the Year several times. She was also on various committees and chairman of committees over the years. Paula was an advocate of her children. Paula was an active member of Rocky Hill Baptist Church before her illness. She served as Chairman of Children’s Department and was a member of the Finance Committee. Paula was an obedient servant. She was also Secretary/Treasurer of the Daniels Reunion for many years in North Iredell. Paula was the daughter of and preceded in death by Paul “Sonny” and Edith Plyler Harris. She was also preceded by grandparents Clyde and Clarice Plyler and Paul and Carrie Harris of Statesville. Paula leaves behind her sweetheart, caretaker and adoring husband, GF Mason of the home. He became her principal caretaker during sickness. She is also survived by one son, Christopher Johnson (Deidra) of Vashti, daughters, Stephanie J. Mishoe of Statesville, Maleia M. Orbison of Statesville, Dayna M. Posada (Tony) of Statesville, 9 grandchildren, Pepper and Zeke Mishoe of Statesville, Levee Courier of Statesville, Colton Johnson of Vashti, Bella Terblanche of Statesville, Gabby and Dante Posada of Statesville, Tanisia Smith of Wilmington, and Kaden Smith of Vashti. Also surviving are brother, Tim Harris (Jan) of Chesterfield, SC and Marty Harris of Statesville, special nephews, Craig Campbell (Kim), Mickey Campbell (Teresa), Eddie Campbell, Jonas Campbell, Mark Mason and Jimmy Mason, Rev. Tony Bunton (Pamela), nieces, Nichole Flynn, Skylar Campbell, Sharon Adams (Dale), special aunts and uncles, Melvin Harris (Shirley) and Marie Harris. Paula had many cousins that she has special memories of from a different time. Other survivors are former Central School Staff and her precious Central “Babies”. A Celebration to honor Paula’s life will be on Wednesday, September 15, 2021, at 3:00 pm at Rocky Hill Baptist Church in North Iredell. Leading the service will be Pastor Henry Cook and assisted by Julia Prevette and numerous “Central Babies”. Burial will follow in the Church cemetery. You may visit with family and friends prior to the Celebration of Life from 11:00 am to 3:00 pm. The family will assemble at Paula’s home at other times. In lieu of flowers, memorials in Paula’s honor may be given to Feed the Children of Iredell County-Children’s Home. PO Box 451, Statesville NC or to the American Red Cross, 1710 Davie Ave. Ste. B, Statesville, NC 28677. Fond memories and condolences may be left at www.nicholsonfunerals.com. Nicholson Funeral Home is serving the Mason family. Special thanks to West Iredell Dialysis and Hospice of Iredell County for the living care given to Paula.

Paula Harris Mason joined her Jesus along with loved ones as she made her heavenly journey on Friday, September 10, 2021. Paula has fought a good fight. She had a rare blood cancer under the umbrella of myelodysplasia (MDS). This disease created... View Obituary & Service Information

The family of Paula Harris Mason created this Life Tributes page to make it easy to share your memories.

Paula Harris Mason joined her Jesus along with loved ones as...

Send flowers to the Mason family.