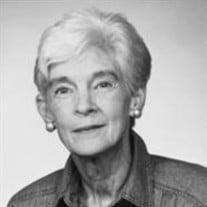 Peggy Joyce Welborn Murdock passed away on February 24, 2020 following an extended illness. Peggy was born to Clarence and Mabel Welborn on August 27, 1928. Peggy thrived on the close family and hometown relationships established in Statesville, North Carolina. Following graduation from Statesville Senior High School in 1946, Peggy traveled to New York City to continue her practice and studies of classical ballet. Returning to Statesville, Peggy married her childhood sweetheart William Cooper Murdock, Sr (Big Bill) on March 27, 1948, continuing a life-long, seventy-seven-year, love affair that began in her fourth grade year when a “cute boy” tugged on her pigtails. Peggy and Big Bill started their family while Bill attended Appalachian State University in Boone, North Carolina. Peggy and Bill’s home quickly became the rambunctious epicenter for their three children and for the many friends of their children for whom Peggy became a surrogate Mom. She welcomed all with open arms, an open heart, an open mind, and a plate-full of the tasty goodies that seemed to magically appear from her kitchen. Peggy welcomed and treasured all who entered into her world in both Statesville and Fuquay Varina, North Carolina, her family home since 1968, including neighbors, children, dogs, cats, guinea pigs, chickens, stopping only to object to the idea of hibernating a “pet” Kingsnake in her refrigerator. She was a School Room Mother for many classrooms, a credentialing advisor to the Statesville school system, Girl Scout Troop Leader, Cub Scout Den Mother, and the biggest fan at the sporting events of her children and their friends. Peggy exhibited a natural curiosity and intellect through-out her life. Her knowledge of cookbooks and recipes grew to encyclopedic portions. She was considered as a resident expert in wild-flower and bird life of both Eastern and Western North Carolina. Peggy truly enjoyed and appreciated the regional and cultural diversities that were encountered in her twenty-five years of business travel with Big Bill. Peggy celebrated the births of her five grandchildren. She took under her wings the grandchildren of extended family and friends; they were all her “Grandbabies”. She remained until her dying day active, interested, and involved in the celebrations of all of her family, particularly her grandchildren. Following the personally devastating death of Big Bill in January 2016, Peggy continued on to welcome into her fold three great-grandchildren; her “four generations” family photographs were a source of great joy. Peggy was preceded in death by her husband, William Cooper Murdock, Sr., her parents, two sisters and her only brother. She is survived by her children, William Cooper Murdock, Jr., Barbara Anne Rabold, Michael Welborn Murdock, Lynn Murdock Commander, and Walter Edward Commander; her grandchildren, Emmy Joyce Murdock, Lucy Marie O’Brien, Rachel Helen Commander, William Patrick Murdock, and Julia Morgan Commander; her great-grandchildren, Caroline, Cooper, and Parker; and her extended grandchildren Scout Henninger and Gus Henninger. From Peggy we have learned to listen, to study, to practice leadership, to be accepting and forgiving, and to love without reservation. The expectation that someone, anyone, should follow her own model was never the first thing on Peggy’s to-do list. Nevertheless, her family members will try. A family graveside service will be held at a future date. In lieu of flowers, memorial contributions may be made to St. Jude’s Children Hospital (stjude.org), The National Audubon Society (action.audubon.org), The SPCA of Wake County, NC (spcawake.org), and the Wake County Hospice (transitionslifecare.org). Online condolences can be made to the family at www.nicholsonfunerals.com. Nicholson Funeral Home is providing services to Peggy’s family.

The family of Peggy Joyce Welborn Murdock created this Life Tributes page to make it easy to share your memories.

Send flowers to the Murdock family.