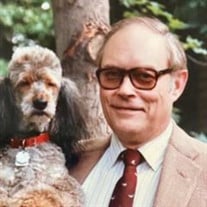 Percy “Mac” McNeer Dillon Jr., a resident at Ashton Health and Rehabilitation Center in McLeansville, N.C. and formerly of St. Louis, MO. and Statesville, N.C., died of natural causes at the age of 92 on April 21, 2021. Mac was born on January 30, 1930 in Statesville, North Carolina, to Percy McNeer Dillon, Sr. and Helen Brown Dillon. He earned the honor of Eagle Scout at the age of fifteen (verify). Mac graduated from Statesville High School, earned his B.S from University of North Carolina at Chapel Hill. Mac joined the U.S. Navy as an Ensign and attained the rank of Captain during his service in the Korean War. On June 4, 1960 in Raleigh, NC, Mac married his beloved wife Anne Rosson Fuller, native of that city. He began his career in industrial engineering began at his father’s shirt factory in Statesville. He continued his work abroad for firms in Milan, Brussels and Lisbon. He finished his career in St. Louis, where he lived for over forty years. His wife of 36 years, Anne died in 1996. Mac was also predeceased by his sister, Patricia Ann Dillon in 2020. He is survived by three nieces and three grand-nieces and two grand-nephews. Mac was endlessly curious, teaching himself Italian, Spanish, French and Portuguese. He was a small aircraft pilot and loved taking family members on flights over North Carolina. Always a dedicated environmentalist, Mac was a volunteer for the Sierra Club and the Nature Conservancy. He also served as the President of the Statesville Toastmasters. A graveside service will be held at Oakwood Cemetery on November 6, 2021 at 10:00AM. The family will visit with friends on Saturday afternoon 1:30-3:30 p.m. at The Inn on Front Street. In lieu of flowers, memorials may be made to the Sierra Club, the Nature Conservancy and Hospice of Greensboro (www.authoracare.org). Nicholson Funeral Home is serving the family of Mr. Dillon. Condolences may be sent online to the family to www.nicholsonfunerals.com.

The family of Percy Mac Dillon created this Life Tributes page to make it easy to share your memories.

Send flowers to the Dillon family.