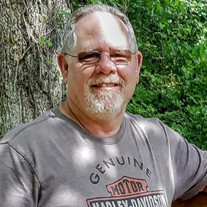 Phillip "Phil" Carter Plyler, 63, of Statesville, passed away peacefully surrounded by family on Sunday, March 21, 2021 at Iredell Memorial Hospital. Phil was born in Iredell County on May 23, 1957 and was the son of the late Billie Ruftin Plyler and Cynthia Sue Miller Plyler. He was a graduate of North Iredell High School and attended Mitchell Community College. On August 26, 1995, Phil married Peggy Duncan Plyler. They were blessed with 25 wonderful and adventurous years of marriage before his passing. Phil was employed with John Woodie Enterprises where he worked as a parts salesman. In earlier years, he was widely known for working in the tire business and serving the residents of Iredell and surrounding counties working for Alray Tire. Phil was a man who enjoyed the wind in his face, blowing through a helmet. He loved riding motorcycles and in earlier years, he raced speedboats professionally . He was a member of Horizon Church, where he served as an elder and was also certified as an ordained minister on May 15, 2005 . His weekends were best spent with his wife, children, and grandchildren. Phil loved serving God and lived his life reflective of that. He imparted his wisdom and he instilled his love for God in his family and grandchildren. In addition to his parents, he was preceded in death by a son-in-law, John Michael Clanton, and a brother, Jeffrey "Scott" Plyler. Left to cherish his memory are his wife, Peggy, three daughters, Kelly Lackey(Michael) and their son Matthew; Robin Clanton and her children, Chloe and Ellie; and Casie Anderson and her son Carter Anderson. He is further survived by one brother, Paul Plyler and one sister, Beverly P. Williams. Services celebrating the life of Phil Plyler will be conducted at 6pm Friday, March 26 in the Nicholson Funeral Home Chapel with Pastors Charles Williams and Jason Bost Sr. officiating. The family will visit with friends directly following the service. For those who are unable to attend, the services will be live-streamed. In lieu of flowers, memorials may be made to Phil's home church, Horizon Church, 316 Signal Hill Drive, Statesville, NC 28625. Online Condolences can be made to the family at www.nicholsonfunerals.com and Nicholson Funeral Home is serving the family of Phil Plyler. You may watch the service live here: https://www.oneroomstreaming.com/view/authorise.php?k=1616554827107372 You may watch the end of the service here: https://view.oneroomstreaming.com/authorise.php?k=1616814192107909

Phillip "Phil" Carter Plyler, 63, of Statesville, passed away peacefully surrounded by family on Sunday, March 21, 2021 at Iredell Memorial Hospital. Phil was born in Iredell County on May 23, 1957 and was the son of the late Billie Ruftin... View Obituary & Service Information

The family of Phillip Carter Plyler created this Life Tributes page to make it easy to share your memories.

Send flowers to the Plyler family.