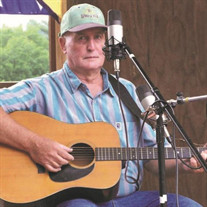 Ralph Franklin Clanton, 85, formerly of Statesville passed away August 6, 2021, at his residence in Elkin, NC. Ralph was born February 18, 1936, in Iredell County, and was the son of the late Franklin Bard Clanton and Ollie Mae Tilley Clanton. He worked in many fields, was a security guard for Wilson Security, worked for the State Park and Vulcan Materials and others. He was a caregiver of many elderly friends over the years. Ralph’s greatest love was music. He was very talented and could play many instruments. He performed at Chicken Fest, Apple Festival, Union Grove Fiddler’s Convention, Wilkes Acoustic Folk Society, and Merle Fest. He and his music companions played at nursing homes, family gatherings, and at dances. He loved sharing his musical talent with anyone and everyone. His smooth voice and steady rhythm guitar playing was perfect for the old-time bluegrass music and old gospel music. He ended most of his performances with “What a Friend We Have in Jesus”. His friends considered him the “Rock Star of Bluegrass”. In addition to his parents, Ralph was preceded in death by his brothers, Buford Clanton and Raeford Clanton, and his sisters, Hilda Clanton Roseman and Jeanette Clanton Pegram. Ralph is survived by his sisters, Irma Clanton Apple of Anderson, SC, and Aileen Clanton Loyd (Max) of Clemson, SC, his brother Dorman Clanton (Sue) of Statesville NC, and several nephews and nieces and great nephews and great nieces. A Graveside Service will be held at Rocky Hill Baptist Church Cemetery, 823 Mountain View Rd., Statesville NC on Thursday, September 16, 2021, at 2:00 pm. Memorials can be made to the charity of your choice or to Rocky Hill Baptist Church. Fond memories and condolences may be left at www.nicholsonfunerals.com. Nicholson Funeral Home is serving the Clanton family.

Ralph Franklin Clanton, 85, formerly of Statesville passed away August 6, 2021, at his residence in Elkin, NC. Ralph was born February 18, 1936, in Iredell County, and was the son of the late Franklin Bard Clanton and Ollie Mae Tilley Clanton.... View Obituary & Service Information

The family of Ralph Franklin Clanton created this Life Tributes page to make it easy to share your memories.