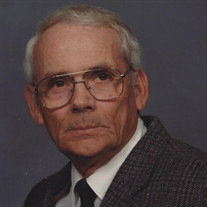 Mr. Rex Eugene McCoy, 85, of Statesville, peacefully entered his heavenly home Friday, February 7th at the Gordon Hospice House. Born in Iredell County on July 14, 1934, he was a son of the late David Glenn McCoy and Daisy Wilhelm McCoy, and stepson of Allie Warren McCoy. In addition to his parents, he was preceded in death by his wife, Shirley Bernice Goforth McCoy, his son, Dennis Eugene McCoy, brothers: James (Jimmy), Tom, Donnie, and Ronnie McCoy, as well as sisters: Billie Morrison and Mary Ann Summers. While in the U.S. Army, he fought courageously in the Korean War. He was a faithful member of Mt. Sinai Evangelical Methodist Church, where he served as a head usher for over thirty years. A man of faith and fervent prayer, he never failed to shower his loved ones, community, and the world in prayer. He was an avid fisherman, die-hard Orioles fan, and a loving father, grandfather and great grandfather who lived to spoil all who knew him. He was known for leaving a trail of bubblegum everywhere he went, never failing to satisfy the sweet tooth of his friends and neighbors alike. He was also formerly the owner and operator of Designer Tile and Marble. Survivors include his three daughters, Dolly Van Wy (Edward) of Townsend, Ga., Jackie Burks (Dwight) of Statesville, and Sarah Barker (Jeff) of Statesville. Also surviving is a brother, David Glenn McCoy Jr. of Troutman. Additional survivors include grandchildren: Amanda Perdue (Jon), Jacob Seth Van Wy (Courtney), Paula Burks (Daniel), and Adriana, Benjamin (Ryleigh), Rebekah, and William Barker, along with 16 great-grandchildren and numerous nieces and nephews. His best friend, Kat, also survives. Please join us in celebrating his life on Sunday, February 16, 2020, at Mt. Sinai Evangelical Methodist Church with Pastor John Phillips, Jr. and Pastor Mike Kilpatrick officiating. The family will gather with loved ones in the church fellowship hall from 1:30 until 3:00 p.m. prior to the service. Burial will follow in the church cemetery with full military rites presented by the North Iredell American Legion Post # 113. In lieu of flowers, memorials may be made to The South Statesville Fund at Western Avenue Baptist Church or the Building Fund at Mt. Sinai EMC. Nicholson Funeral Home is entrusted with the arrangements. Fond memories and expressions of sympathy may be shared at www.nicholsonfunerals.com.

The family of Mr. Rex Eugene McCoy created this Life Tributes page to make it easy to share your memories.

Send flowers to the McCoy family.