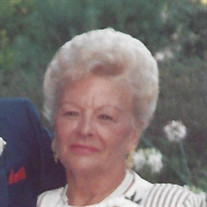 Sadie Ann McCormick Wilcox, 93, passed peacefully Wednesday, October 27, 2021. She was born October 7, 1928 in Trenton, New Jersey to the late Sadie Anthony McCormick and Harry Fetters McCormick. She married Jesse B. Wilcox, Jr. of Morrisville, PA on January 2, 1946 and together they settled in Hamilton Township, NJ raising three children, Linda Woodhead (Charles), Beverley Woodard (Andy Cartner), and Jesse B. (Jay) Wilcox, III. Other surviving loved ones include a sister, Delores (Mickey) Baum, nephews: Charles Baum (Dorothy) and Brian Baum, grandchildren, Lisa Andrade (Miguel), Jennifer Schumacher (Cliff), Christine Inman (Christopher), Matthew Woodard, Angela Slater (Adam) and David Wilcox (Amanda) along with nine great-grandchildren, Nicholas, Reece, Tori, Anna, Lilly, Leanna, Luke, Ethan and Lizzy. Sadie was preceded in death by her husband of 49 years, a grandson, Aaron Wilcox and daughter-in-law, Sharon Parent Wilcox. Sadie retired from Sears Roebuck and Company after many years of service and her last position in the Auditing Department which she greatly enjoyed. She moved to North Carolina in 2008 and resided in the North Iredell area with her daughter Beverley and her special friend, Andy Cartner, whom she came to love as her son-in-law. She was an avid reader, puzzle solver, and especially loved playing Solitaire on her computer and enjoyed watching the birds and small creatures from her favorite window seat. She always looked forward to her day out that was spent shopping and sharing a meal at one of her favorite restaurants. Many times she commented that she loved living in North Carolina. She was a loving mother and a major influence on her children teaching many valuable lessons in her unique way. Dignity, loyalty, self-control, and honesty will always be a reminder to us of who she was. Funeral arrangements are being handled by Nicholson Funeral Home in Statesville, N.C. and Knotts Colonial Home in Trenton, New Jersey and her final resting place will be in the Ewing Cemetery in West Trenton, New Jersey. Condolences may be sent online to the family to www.nicholsonfunerals.com. Memorials may be given to Hospice & Palliative Care of Iredell County, 2347 Simonton Road, Statesville, N.C. 28625.

The family of Mrs. Sadie Ann Wilcox created this Life Tributes page to make it easy to share your memories.

Send flowers to the Wilcox family.