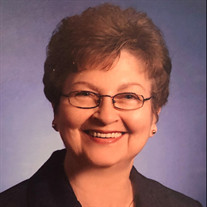 Shirley Ann Dollar Eller, age 80, of Statesville, North Carolina, formerly of Ashe County died February 13, 2020 at the Gordon Hospice House in Statesville. She was born on March 19, 1939 to Garland Alton and Margaret Beatrice Shatley Dollar in Warrensville, NC. In addition to her parents she was preceded in death by her brother and sister-in-law, Jack and Eula Mae Dollar; two sisters and brothers-in-law, Kathleen and Eldon Ashley, Geneva and Buster Black. She is survived by her husband of 63 years, Jay Eller of the home; daughter and son-in-law, Debbie and Tim Burgess of Statesville; two granddaughters and spouses, Drew and Wilson Yang of Toronto, Canada and Ali and Tyler Lewis of Burlington, North Carolina; two sisters and brothers-in-law, Phyllis and Johnny McNeil of Lansing, North Carolina and Josephine and Joe Hoosier of Jefferson; special friend and caregiver, Shirley Brown of Statesville; several nieces, nephews, cousins and a host of friends also survive. Shirley will be remembered as a devoted and loving wife, caring mother, and a doting grandmother who loved to be in the company of her family and friends. She was the owner and operator of The Palace Beauty Salon in Warrensville, North Carolina. As avid campers, Shirley and Jay made numerous friends at the local campgrounds in Statesville, Wilkesboro and West Jefferson. Funeral services will be conducted on Sunday at 3:00 PM at the Nicholson Funeral Home Chapel in Statesville by the Rev. Tommy Dollar, and Rev. Jeff Luxon. Burial will immediately follow in the Oakwood Cemetery. The family will receive friends on Saturday evening, February 15, 2020 at the Boone Family Funeral Home in West Jefferson from 6:00-8:00 PM. The family will also receive friends at the Nicholson Funeral Home two hours prior the funeral on Sunday. Flowers will be appreciate or memorial contributions may be made to the donor's choice.

The family of Mrs. Shirley Ann Dollar Eller created this Life Tributes page to make it easy to share your memories.

Send flowers to the Eller family.