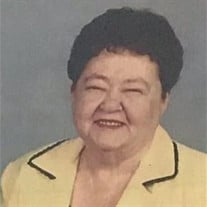 Sylvia Ann Hoke Dishmon was born April 9, 1939 in Statesville, North Carolina, to the loving parents of Loy and Katherine Hoke. Sylvia, A genuine county girl grew up on her parent’s farm helping her mom and dad in the huge garden they always had and being a little mama to her two brothers, Alan and Jerry. She learned to can the fresh vegetables from the huge garden and could pick cotton with the best of them. Sylvia loved cooking and baking biscuits back then and still enjoyed that to this day. Sylvia’s family farm was probably the last farm in the county to use a tractor, they plowed their acreage using mules which was a tough job just ask her brother, Alan. In addition to their farm, Sylvia’s grandparents lived just across the way where together they farmed many acres. Later on, when they were getting older Sylvia was called on to be a caregiver to her grandparents and was faithful in helping them. Sylvia attended Celeste Henkle School and graduated in 1957. After graduation, she worked at Rayless Department Store and Later at Thonet Mills. Sylvia and Shirley Benfield were childhood friends who often played together. They were both members of Mt. Hermon and later on after Shirley met and married Ted Riddle, they introduced Sylvia to their “baseball friend” Wayne Dishmon. That introduction was the beginning of a relationship that would culminate in marriage. On August 13, 1960, in Wayne and Sylvia were married at Mt. Hermon. About a year later their son, Billy was born. They enjoyed camping, fishing, going to the beach and visiting the mountains. They spent many weekends camping with their good friends Shirley and Gladys Little and Jim and Dot Shoemaker. One year, Wayne took some time off from his job at Southern Screw Company and they Drove to visit her brother, Jerry in Utah. Wayne passed away in 2004 after almost 44 years of marriage. Sylvia still lived with her son, Billy in they home were she and Wayne lived a home that ger father and brothers built for them. Sylvia enjoyed watching Rachel Ray on TV, going out to eat and shopping at Walmart. She enjoyed singing in the church choir and will call her sister in law, Linda Hoke, on Saturdays to remind her that she needs a ride to church. Left to cherish her memory is Billy and special friend, Sandra Hager; brother’s Loy Alan Hoke and wife Linda and Jerry Franklin Hoke and wife Holly; special friend, Berlene Ashley and many other loving family members. A funeral service will be held on Thursday, January 30, 2020 at 3pm at Mt. Hermon Lutheran Church with Pastor Will Dulin officiating. Burial will follow in the church cemetery. The family will gather and receive friends from 2-3pm prior to the service at the church. Fond memories and expressions of sympathy may be shared at www.nicholsonfunerals.com. Nicholson Funeral Home is honored to be serving the Dishmon Family.

Sylvia Ann Hoke Dishmon was born April 9, 1939 in Statesville, North Carolina, to the loving parents of Loy and Katherine Hoke. Sylvia, A genuine county girl grew up on her parent&#8217;s farm helping her mom and dad in the huge garden they... View Obituary & Service Information

The family of Mrs. Sylvia Ann Hoke Dishmon created this Life Tributes page to make it easy to share your memories.

Send flowers to the Dishmon family.