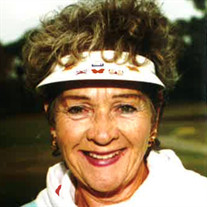 On Saturday, February 15, 2020, Violet Pauline “Polly” Parker, loving mother of three children, grandmother to six, and great grandmother to three, passed away peacefully at the age of 97 at her grandson’s home with her son Thomas Pennington and daughter-in-law Teresa by her side. Polly’s life was a lesson in true resilience. Polly was born on August 9, 1922, to Bessie Lippard and Noble Oscar Williams and was raised with her five siblings in Statesville NC, during the Great Depression. She attended Statesville High School where she met and later married Austin Reavis. Polly subsequently gave birth at a young age to their two daughters, Patsy and Sue. Under difficult circumstances, Polly and Austin subsequently divorced, and she moved with her two young daughters to Washington, DC, in the early 1950s, where she took-on single motherhood as a small-town-girl in the big city. She worked for Blue Cross Blue Shield where she later met the love of her life, Carroll Pennington. They soon married, and she gave birth to their son, Thomas. Polly subsequently worked at Peoples Life Insurance Company as an executive secretary. Carroll passed away in 1982 and Polly moved to Crystal City, VA, just outside Washington, DC, where she took up new interests, including ballroom dancing, which is how she met her third husband, Arthur Locke. Polly later married Arthur and moved to Crystal River, FL, where she became an avid golfer. She began playing in her mid-60s and scored a hole-in-one just a few years later, which is something many life-long golfers never achieve! She continued to golf well into her 80’s. Arthur and Polly divorced and she subsequently married William Parker, who passed away in 2014. Polly lived independently until 2017 when, at the age of 95, she moved into an assisted living facility near her son Thomas, and his family, in Huntsville, AL. Polly loved to visit with friends and family, travel to new places, play bingo, and bask in the sun whenever possible. She enjoyed boating, watching the sun rise and set over the water, and taking in the beauty of God’s creation. Polly had a servant’s heart; she was always active in her local church and volunteered faithfully for 25 years at Crystal River Hospital. She also cared deeply for veterans and children’s causes, donating regularly to various charities. Polly was preceded in death by her parents Bessie Lippard and Noble Oscar Williams; siblings Grover, Harold, Charles, Dewey, and Ruth; husbands Austin, Carroll, Arthur, and William; and daughter Patsy. She is survived by her daughter, Sue and son-in-law Richard Latham; her son Thomas and daughter-in-law Teresa Pennington; grandson Richard and his wife Kimberly Latham; grandson Corey and his wife Hilary Pennington; grandson Joshua and his wife Riley Pennington; granddaughter Emily Pennington; granddaughter Amanda Pennington, and grandson Jonathan Pennington; and great grandchildren Jordan and Bradley Latham, and Liliana Marie Pennington. She is also survived by several nieces and nephews. In lieu of flowers memorials may be made to the Alzheimer's Foundation of America, 322 Eighth Avenue, 16th Floor, New York, NY 10001 or at https://alzfdn.org/support-us/donate/ or Make-A-Wish America Gift Processing, 1702 East Highland Ave., Suite 400, Phoenix, AZ 85016 (please include the gift form) or at www.wish.org.

On Saturday, February 15, 2020, Violet Pauline &#8220;Polly&#8221; Parker, loving mother of three children, grandmother to six, and great grandmother to three, passed away peacefully at the age of 97 at her grandson&#8217;s home with her son... View Obituary & Service Information

The family of Violet Pauline "Polly" Parker created this Life Tributes page to make it easy to share your memories.

Send flowers to the Parker family.