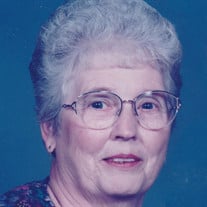 Mrs. Virginia Ruth Campbell Drye, 84, of Statesville, passed away on Friday, December 27, 2019 at the Gordon Hospice House. Mrs. Drye was born in Iredell County on January 10, 1935 and was the daughter of the late J. Lee Campbell and Jettie Reid Campbell. She attended Cool Spring School and on May 24, 1952 she married Lawrence W. Drye and together they shared 67 years of marriage until her passing. Mrs. Drye was a member of Cool Spring United Methodist Church and she retired from J.C. Penney Distribution. Mrs. Drye, affectionally known as “Jay Bird”, had a passion for traveling and especially beach trips with her husband, children and grandchildren. She also had a love for children. She often times would babysit for folks in the community but most of all she enjoyed babysitting her grandchildren and great-grandchildren. Her passion in life was for her family. Although she may be gone from here, her memory will live on in her family. In addition to her parents, she was preceded in death by two sons, Gary Drye and Lawrence “Lanny” Drye, Jr along with one granddaughter, Kelli Drye. She was also preceded in death by three brothers, Roy, Wade, and Billy Campbell. Along with her husband Lawrence W. Drye, Sr, she is survived by two daughters, Sandra D. Rackley (Mark) and Tina D. Compton (Barry), both of Statesville; seven grandchildren, Noah, Andy, and Kerri Drye, Jason and Justin Rackley and Chris and Brandon Compton along with 11 great-grandchildren, Kaleb, Ashlen and Madison Drye, Nolan Anderson, Kyler, Ryann, James, and Will Rackley and Brodie, AnnaLacie, and Braelyn Compton. She is further survived by three sisters, Betty Drye of Statesville, Martha Nell Feimster of Stony Point and Brenda Orren (David) of Troutman. A service to celebrate the life of Virginia Drye will be conducted at 2:00 PM Tuesday, December 31, 2019 at Cool Spring United Methodist Church with Pastor Tom Jones officiating. The family will visit with friends from 12:30 until 1:45 PM at the church. Burial will follow in Oakwood Cemetery. Grandsons will serve as active pallbearers: Noah, Andy, Jason, Justin, Chris and Brandon. Honorary pallbearers will be Russell, Caleb, Kyler, Brodie, James, and Will. In lieu of flowers, memorials may be made to the Gordon Hospice House, 2341 Simonton Road, Statesville, NC 28625. Online condolences can be made to the family at www.nicholsonfunerals.com and Nicholson Funeral Home is honored to be serving the family of Virginia Campbell Drye.

Mrs. Virginia Ruth Campbell Drye, 84, of Statesville, passed away on Friday, December 27, 2019 at the Gordon Hospice House. Mrs. Drye was born in Iredell County on January 10, 1935 and was the daughter of the late J. Lee Campbell and Jettie... View Obituary & Service Information

The family of Virginia Campbell Drye created this Life Tributes page to make it easy to share your memories.

Send flowers to the Drye family.