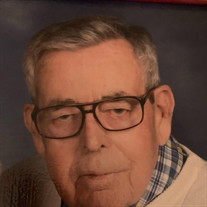 Mr. William (Bill) Milan McEvilly, 91, of Statesville, died Tuesday, March 29, 2022 at his home. Born in Clinton, Massachusetts on July 2, 1930, he was a son of the late Peter McEvilly and Madeline Daughn McEvilly. His working career was in textile management and he was an active member of St. Philip The Apostle Catholic Church. He was preceded in death by a son, Billy McEvilly and a brother, Thomas McEvilly. Survivors include his wife, Antoinette K. McEvilly, a daughter, Mary Hedrick, and her friend, Mike Maher, 3 grandchildren: Madeline Hedrick, Luke Hedrick and Hannah Hedrick and a great grandchild, Mia Hedrick. Also surviving is a brother, Peter McEvilly. Bill was a graduate of Holy Cross College in Worcester, Mass. After graduation, he served in the U. S. Navy as a lieutenant j.g. aboard the USS DeLong. Bill married Antoinette (Toni) Kotch in 1966 and moved to Statesville with their family in 1969. Bill enjoyed spending time with his daughter, Mary and his grandchildren and great grand daughter. Bill was an avid sports fan and especially loved the Boston Red Sox and Boston Celtics along with the Clemson Tigers. The McEvillys would like to thank the Oneida Lazo family for their love, support and friendship throughout Bill’s short illness. A funeral mass will be conducted at 11:00 A.M. Monday at St. Philip The Apostle Catholic Church with Father Thomas Kessler officiating. The family will greet friends at the church for one hour prior to the service and burial will follow in Oakwood Cemetery. Condolences may be sent online to the family to www.nicholsonfunerals.com. In lieu of flowers, memorials may be given to St. Philip The Apostle Catholic Church Forward With Christ Building Campaign, 525 Camden Dr. Statesville, N.C. 28677. Nicholson Funeral Home is entrusted with the arrangements.

Mr. William (Bill) Milan McEvilly, 91, of Statesville, died Tuesday, March 29, 2022 at his home. Born in Clinton, Massachusetts on July 2, 1930, he was a son of the late Peter McEvilly and Madeline Daughn McEvilly. His working career was in... View Obituary & Service Information

The family of Mr. William Milan McEvilly created this Life Tributes page to make it easy to share your memories.

Send flowers to the McEvilly family.