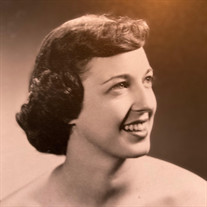 Lura died peacefully at home surrounded by loved ones. A woman of strong faith, Lura was not afraid of her earthly separation. She enjoyed her loving family, home, and the simple joys of life. She delighted in watching the songbirds that visited her kitchen window every morning. Although her ninety-six-year-old body did not always cooperate, her sharp mind accompanied her to the end, allowing her to solve mysteries and work her crossword puzzles. She was the very definition of an optimist and a master of quick wit. Her sense of humor produced contagious laughter from those around her. She was a great role model in her family and the community. Given her lovely, but unusual name, Lura, most often confused with Laura, she would break out in the tune of the classic Irish lullaby “Tura Lura Lural” to help people with the pronunciation. Lura was born to the late Clarence Walker McLain and Mable Guy McLain, both of Statesville, North Carolina. Except for a few years in Atlanta, Georgia, Lura spent most of her life in Statesville. Locals may recall that her father, Walker McLain, was a Statesville City Alderman and a Supervisor at Phoenix Mills, and her grandfather the late Wm. Pressley McLain owned a food market located on Center Street downtown. After graduating from Statesville High School class of ’42, she continued her education at Mitchell College. She held fond memories of her working days at the J.C. Penney warehouse office, Ramsey’s Department Store, and as a switchboard operator for the phone company. She spoke of seeing the lines light up as the news of President Franklin D. Roosevelt’s death was shared. Mrs. Dotson’s Boarding House would be the spot where Lura met the love of her life, George Alfred Langston, Jr. whom she would marry in 1952. She was forever proud of his WW2 service as a Medic in the Navy serving in the Pacific theater and frequently reminisced about great times they spent dancing and playing bridge. Al preceded her in death in 2007. Lura and Al had two children - Melinda Langston (Atlanta) and son David Walker Langston (Statesville), wife Rhonda; four grandchildren - Allison Langston Fuster (Atlanta, GA), Julia Maria Langston Fuster (Winston Salem, NC), Jeremy David Walker Langston (Thomasville, NC), and Emily Chloie Langston (Statesville, NC).; and those who call her “Granny” - Matt Kern, Reagan Burchett, Trevor Smith, and Kala Rust. In addition to her parents, Mable and Walker, and her husband Al, Lura was also preceded in death by her sister, Mary McLain Bryant. She is survived by Melinda, David, Allison, Julia, Jeremy, Emily and additional relatives – Jan Bryant Shuford (niece), Kathryn Guy Holbrook (cousin), Tommye Evans Imschweiler (cousin) and dear life-long friend Doris Hartman. Indeed, a full life, well lived and well loved. The family is grateful for Pastor Todd McCullough and Lura’s loving, caring New Salem United Methodist Church community for lifting her up in prayer for many years. Deeply appreciated are the many wonderful caregivers who are like family friends, and the staff and health care professionals of Hospice & Palliative Care of Iredell County. A very special note of gratitude goes to Glenda Widby who promised to “be with her to the end” and was. In Lieu of flowers, donations can be made to New Salem United Methodist Church. Visitation with the family will be held at Nicholson Funeral Home on Thursday, February 3rd from 6-8pm. Graveside service and burial will be at Gaston Memorial Cemetery, Gastonia, NC on Friday, February 4th at 12:30pm. Online condolences can be made to the family at nicholsonfunerals.com and Nicholson Funeral Home has the honor to serve the family of Lura Langston. https://view.oneroomstreaming.com/authorise.php?k=1643876545164374

Lura died peacefully at home surrounded by loved ones. A woman of strong faith, Lura was not afraid of her earthly separation. She enjoyed her loving family, home, and the simple joys of life. She delighted in watching the songbirds that visited... View Obituary & Service Information

The family of Lura McLain Langston created this Life Tributes page to make it easy to share your memories.

Lura died peacefully at home surrounded by loved ones. A woman...

Send flowers to the Langston family.